Sept. 6, 2006
Dwayne Brown/Erica Hupp Headquarters, Washington 202-358-1726/1237
Guy Webster Jet Propulsion Laboratory, Pasadena, Calif. 818-354-6278
RELEASE: 06-307
NASA ROVER NEARS MARTIAN VICTORIA BOWL GOAL
NASA's Mars rover Opportunity is closing in on what may be the grandest overlook and richest science trove of its long mission.
During the next two weeks, the robotic geologist is likely to reach the rim of a hole in the Martian surface wider and deeper than any it has visited. The crater, known as "Victoria," is approximately one-half mile wide and 230 feet deep.
Images from NASA's Mars Global Surveyor orbiter show the crater walls expose a stack of rock layers approximately 100 to 130 feet thick. Opportunity will send back its initial view into the crater as soon as it gets to the rim. Scientists and engineers will use Opportunity's observations from points around the rim to plot the best route for entering the crater.
"Victoria has been our destination for more than half the mission," said Ray Arvidson of Washington University, St. Louis. Arvidson is deputy principal investigator for Opportunity and its twin rover, Spirit. "Examination of the rocks exposed in the walls of the crater will greatly increase our understanding of past conditions on Mars and the role of water. In particular, we are very interested in whether the rocks continue to show evidence for having been formed in shallow lakes."
The NASA rovers have been exploring landscapes on opposite sides of Mars since January 2003. Their prime missions lasted three months. Both are still investigating Mars' rocks, soils and atmosphere after more than 30 months. Opportunity works in a region where rock layers hundreds of yards in thickness cover older, heavily cratered terrain.
"We have a fully functional vehicle with all the instruments working. We're ready to hit Victoria with everything we've got," said Byron Jones, a rover mission manager at NASA's Jet Propulsion Laboratory, Pasadena, Calif.
Though it's still winter in Mars' southern hemisphere, days have begun getting longer again, and Opportunity's power supply from its solar panels is increasing daily. During its first two months on Mars, Opportunity examined a one-foot stack of rock layers at its landing site inside "Eagle Crater" and found geological evidence that water had flowed across the surface long ago.
The rover spent the next nine months driving to and exploring a larger crater, "Endurance." There it examined a stack of exposed layers 23 feet thick. Over the drive from Endurance to Victoria, the rocks tell a history of shallow lakes, drier periods of shifting dunes and groundwater levels that rose and fell. Minerals indicate the ancient water was very acidic.
The much thicker stack of revealed rock layers at Victoria beckons. Arvidson said, "We want to examine the thick section of rocks exposed on the walls in Victoria crater to understand whether the environment that produced these materials was similar to the environment recorded in the rocks that we have seen so far. Is there a record of a different type of deposition? Was there a wet environment that was less acidic, perhaps even more habitable? Where do the layers from Endurance fit in this thicker sequence?"
NASA's Mars Reconnaissance Orbiter reached Mars in March 2006. It will begin its primary science phase in November, offering higher resolution images and mineral mapping than have been possible with previous orbiters.
Victoria will be one target for the orbiter. "By combining the data from Opportunity and Mars Reconnaissance Orbiter, we'll be able to do some fantastic coordinated analysis," Arvidson said. Such analysis will enhance the science return of both missions and aid in interpreting orbiter data taken of potential landing sites for future missions elsewhere on Mars.
"It's an amazing accomplishment that Spirit and Opportunity have completed the equivalent of 10 prime missions," said John Callas, rover project manager at JPL. "Each of them shows some signs of aging, though. We can't say how long the rovers will last, but we will push to get the best possible science out of these national treasures as long as they keep operating. Victoria could very well be the most productive and exciting science of the entire mission."
JPL manages the rovers and the Mars Reconnaissance Orbiter for NASA's Science Mission Directorate. For rover images and information, visit:
http://www.nasa.gov/rovers
-end-

http://marsrovers.nasa.gov/gallery/press/opportunity/20060505a/Vic_traverse_labels-A810R1_br2.jpg
Small hot spring 'lake'. http://www.picturesofplaces.com/pictures/usa/wyoming/yellowstone/cistern-spring/large
I suspect most of the large 'holes' in Meridiani started out as impact craters. But the underground water later greatly enlarged and modified them. It seems to me the appropriate way to name such features would be to use their last incarnation. Which would be as lakes fed by underground water as ice ages wax and wane I believe.
I still think Victoria Lake is the proper name.
We'll see soon I think. Can't wait.
Jonathan
Compare the ...shadows... cast in both pics. How long ago was water there???
Yellowstone mudpot 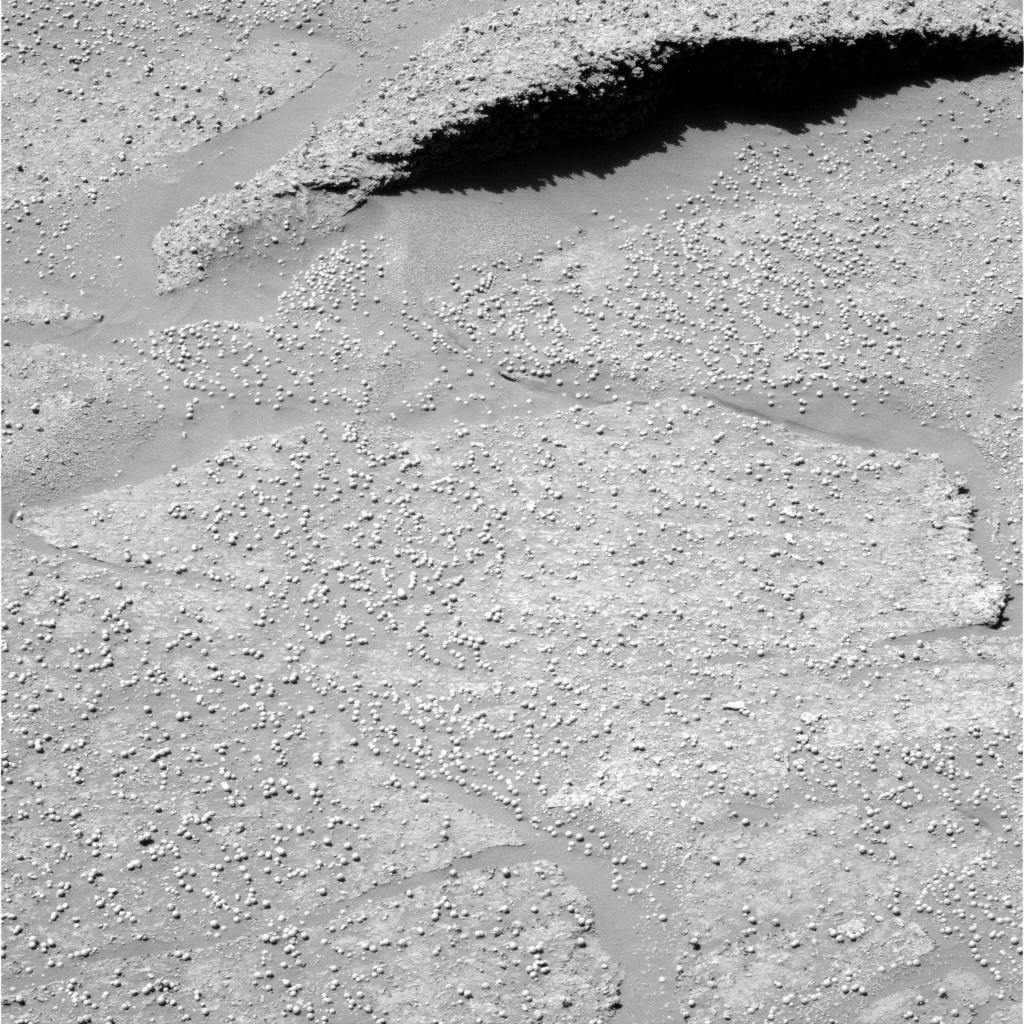 http://qt.exploratorium.edu/mars/opportunity/pancam/2004-07-16/1P143185259EFF3221P2397R1M1.JPG
And just in case anyone has forgotten about those spheres....
Paleoenvironmental Interpretation of the Dakota Sandstone as a Mars Analog, focusing on Concretions http://chapters.marssociety.org/canada/expedition-mars.org/ExpeditionAlpha/crew/Proposal.MelissaBattler.pdf
Concretions
Concretions usually form during the early stages of diagenesis under the influence of bacteria, soon after deposition of sediments, and at shallow burial depths The current understanding (based on isotopic data) is that many concretions form biogenically....
If the acidic lake or a hot spring environments indicated by jarosite existed at one time, they could have supported life. The discovery of bromine is significant because it indicates that a large body of water existed on the surface of Mars for a long time... The discovery of concretions on Mars is profound because many concretions on Earth form biogenically. Thus the Martian concretions might be a strong indication of the past existence of life on another planet.
Mars Analog Conclusions
Given recent discoveries on Mars, the Dakota Sandstone has turned out to be a better analog for Mars than anyone could have predicted. The Dakota Sandstone provides many pieces of evidence for past water and life. The concretions, in particular, strongly indicate past microbial activity.
s
wider and deeper than any it