Hello, all, and after studying the following pic at 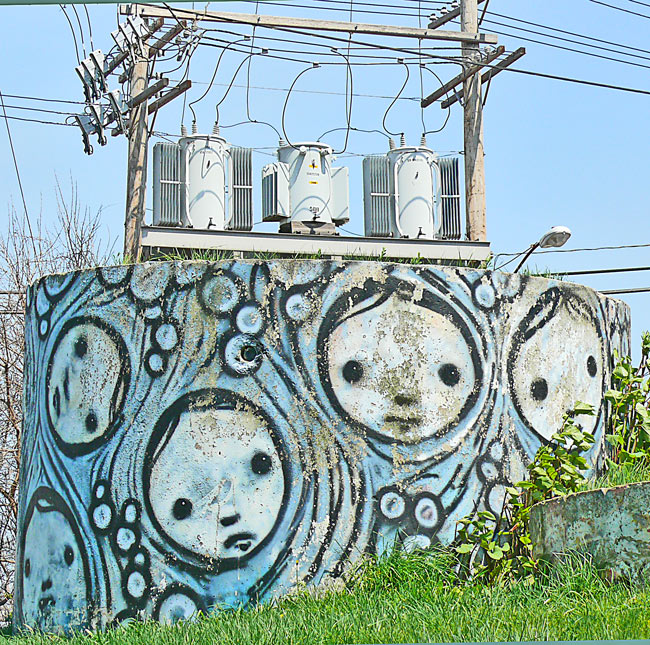 http://realneo.us/system/files/Radke-painting-on-concrete-.jpg , the wiring doesn't seem right. There appear to be two autotransformer boosters at either end of the mounting platform with a conventional transformer in between. The transformer primaries are apparently wired in delta but the secondary connections don't seem to make sense. (A configuration of three booster transformers (one for each phase) would seem more appropriate.) I can't seem to construct a phasor diagram of the wiring shown in the photo and none of my EE handbooks shows anything like this.
With these components I could connect the taps of the two boosters as open delta then close the delta with the secondary of the conventional transformer (assuming it has the appropriate turns ratio). But that isn't the wiring shown in the photo. There also appears to be 4 wires going from the transformers vice 3 wires going to the feeders at the top of the utility poles. Your time and comment is appreciated.

To me, it just looks like a delta-delta transformer bank, with the middle transformer in a different can (different mfg or whatever) than the other two. It's not completely clear since not all the connections are visible (some look like the connect where they probably don't) plus the top is cut off.

Thanks for the prompt reply, Michael. I studied the photo further by zooming in and I think you are correct in that it is a delta-delta configuration. These aren't booster (auto) transformers at all and the photo angle obscures two of the terminals on the tops of the leftmost and rightmost transformers. Sincerely,

Was this some problem you were trying to solve or were you just studying the wiring to try to figure out how everything was wired together and made an incorrect conclusion? Is this some location near you or just a random photograph found on the web or something?
Just curious (I sometimes study transformer banks myself out of idle curiosity)

Hello, Michael, and it was an accidental discovery while Googling for something else and it caught my (engineering) attention. I should've taken that second look earlier instead of wasting so much time on it. I have no idea where the photo was taken. Sincerely,

There are two terminals hidden by others so this confuses the picture- agreed it is delta delta There are two thicknesses of wire.