[PICTURES] Does this wooden structure violate laws of physics?

My 6 year old son built this structure with three supporting columns on the bottom. When time came to destroy it in a spectacular fashion, I suggested pulling out the middle column so that it would crash inward. he did just that, but it did not crash. I have no idea how it may be still standing, but photos prove that it did stand!
http://igor.chudov.com/projects/misc/Impossible-Wooden-Block-Tower/
There are absolutely no hidden gimmicks, chewing gum secretly holding things together, etc. This post is NOT a joke.
i

Iggy
It would appear to, but the right hand stack bears on the lower horizontal block and uses the tapered corner as a fulcrum 'prying up' on it, at least that's my guess. You could probably never build that by design!
Regards Paul

Paul, this seems to be the most plausible explanation, though I cannot fathom how the pressure is so much as to neutralize the load on the middle.
I hope that that VFD is working well for you.
i

Iggy
I still haven't started that project! I've got one paying and two 'freebie' jobs to run across the lathe before I can tear it down to do the retrofit. I've got it all imagineered though...
Regards Paul

I can understand, I think, I have a DRO that I need to install... Same story...
i

The outside blocks on the third level are also outside the line of the cylinders on the second level, so there is a lifting effect against the 3&4 level center posts as well.
The dark Blue block has just enough width to keep the orange from falling.
very interesting.
Stuart

Yea! Someone with a clue.


More important, in this same regard, is that for the center flats on the top two levels to be able to fall down in the center (aka put pressure on that middle cylinder), they would have to lever up the bottom horizontal flat using the inside edge of the those two cylinders they are resting on. Because there are two columns of outside edge flats and only one column in the middle, this fulcrum effect only has to allow each outside column to lift 1/2 the weight of the center. So to be balanced, the fulcrum holding up the bottom flats needs to be 1/3 the way from the outside edge. But the inside edge of the cylinders are both more than 1/3 of the way in, so it can't fall from the center.
In other words, if you pull out that middle cylinder on the second level, the top still won't fall as far as I can tell. Is the structure still standing? Try pulling out that middle cylinder and see what happens. I bet it all still stands. Or, just push down on that center cylinder a little bit and see if it separates from the blocks above. If it does, then you should be able to pull it out. If not, you might have to slide that red cylinder in just a little bit more towards the center and then it should work.
So this means the angle blocks don't need to hold up the entire top structure. They only need to hold the weight of that center white cylinder.
Looking at the left two cylinders (white and blue) you see a fairly strong stack and with the help of the added weight of the entire top structure. For the orange block to fail by falling down, it would create a fulcrum on the right (inside) edge of the blue block below, and lift the column on the left edge of the orange block. That looks like it's creating about a 3 to 1 ratio by my measurement. But since all it has to hold up, is the 1/2 of the center white cylinder and the outside column has the weight 1/2 the entire top structure, a 3 to 1 ratio is far more than what is needed to keep it from falling. It could probably keep standing with a 6 to 1 lever ratio.
Same sort of thing for the right side with red cylinder. Becks of the position of the red angle board, it's actually got a bit more leverage on the outside, but also has to lift from the far end of the red board which is farther, but I still calculate about a 2.5 to 1 ratio. So again, the weight of the outside column still has far more leverage on the red board than what is needed to hold up the center white cylinder by my calculation.
As far as I can see, you can pull out that center white cylinder and it will still stand.
The thing that makes it all work is just what Stuart said. The top two levels of flat blocks is positioned on the cylinders so that the center support isn't needed at all. As such, there's no need for the center to hold any real weight.
It's deceptive looking because we tend to look at the center of the cylinders to judge how the structure is balanced, but to analyze how it fails, you have to look at the outside or inside edges of the cylinders which would the fulcrum when it started to fall. So in your mind, replace those thick cylinders on the second level with thinner blocks positions near the inside edge of the cylinders, and you can get a better visual image of how the top is balanced so that there's little to no weight on the center cylinder. And without the need for the center to hold up the weight then you can understand why it didn't fall down when you removed a center support.
At first glance, it sure looks like it shouldn't be standing. :)

Interesting! The blocks remind me of my childhood when Santa would bring us kids a big box of wooden building blocks every year for Christmas. We built stuff for days upon days for years upon years. Many, many years later I found out the fabulous blocks were firkin' brush blocks!


That is interesting. Some others have pointed out what I was thinking, but it also reminds me of one of the things I saw in a beginning engineering class decades ago, which showed the strange behavior (to us) of some ancient architectural structural designs. If you analyze a dry-laid stone-block wall, you eventually see that it's far more stable than you might think, because of the same effect that is making your son's toy project stay up.
In the row of three round columns, the downward force on the outer two is considerably more than that on the center one, based on how the weight is distributed above them. On the bottom row, the actual length of the lever applied from the two round columns is longer than you might think. On the right (red) one, it extends roughly from the outside edge of the round column. That's the one that's probably holding up most of the weight. But any contribution from the other one helps.
-- Ed Huntress

Full marks, Ed.
Nobody has mentioned the "rule of thirds" yet.


I similarly played with punch cards a lot.
i

That's the first thing I saw, too.

Evidently, the weight of the rounds exceeds that of the flats, so the excess center weight is taken up by the two outside columns. Pretty cool.
------ We're born hungry, wet, 'n naked, and it gets worse from there.


Yes... I am not yet sure what exactly is the explanation, but, obviously, laws of physics are not violated, it just looks that they are.
i

Nice cantilever there. The kid is smart.
Gunner

On the subject of demoltion there is an office block in London where they are currently demolishing it from the bottom first.
http://news.bbc.co.uk/1/hi/england/london/6928569.stm 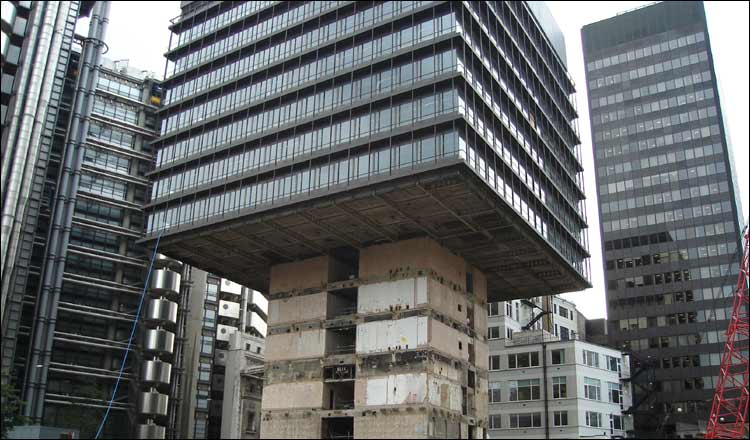 
No, it doesn't. Good job engineering by the 6 year old... The weight is mainly transfered to the outside, so the center support isn't holding much weight. He's got two* times the weight on the outer supports as the inner, so it stands.
*This may not be 2.0000 times, it's just roughly 2:1.
Puckdropper

--
Wise is the man who attempts to answer his question before asking it.

To email me directly, send a message to puckdropper (at) fastmail.fm

Dude! Your kid has a feel for things. Buy him/her a harpsichord.! Or send him/her to Stanford.