Hello, and a question for AC power systems engineers and linemen:
I've seen of few instances in the U.S. (primarily in desert regions of California) where apparently a 3-phase, 3-wire MV system is installed on the crossarms of utility poles but there is no neutral wire as customarily found on the pole below the crossarm. My thinking is that this was done 1) to save money on wire as service drops are few and far between, 2) faults to earth don't occur that often in this service area and fault location/isolation (facilitated by an earth-grounded neutral) is not an overriding consideration and 3) lightning strikes to the overhead wires are rare in this environment. Any MV-LV residential/commercial services would require doubly-insulated (two bushings on the MV/primary side) distribution transformers rather than the more widely used single-bushing line-to-neutral type usually found on 4-wire multigrounded neutral systems. Thanks for your time and comment on the accuracy of my conclusions. Sincerely,

It appears to me that older systems had the local distribution system with delta connected primaries for the local distribution transformers (apparent by two bushings on the transformer cans and two leads to the primaries) and later systems were upgraded to Y connected primaries with a current carrying neutral. It may simply be that the system you saw is older and never converted to the more common Y connected system with a neutral.

I have never seen this but I have not really been in the western deserts that much. I have talked to Canadian electrical guys who say they are still using "earth return" systems up there. I am curious how they earth lightning strikes and stabilize the voltage without an earth reference. The typical distribution in SW Florida is ~13kv wye connected with 3 phases on the main routes and a single phase going down residential streets. I know they use delta distribution in other places with all 3 phases going down the streets and the transformers tap 2 of them. I assume that is what you are seeing. They pick up the ground at the secondary of the transformer and again at the service entrance to the home. Can you get a picture of a transformer?

Hello, and if you Google images on 2-bushing distribution transformers you'll see a number of examples. Other than the additional HV insulator they have the same footprint as a one-bushing transformer of equivalent power handling capability. Of course you can still use a 2-bushing transformer with the HV bushings connected line-neutral as long as the transformer HV side is designed for the correct MV distribution voltage. Most of the time these days (at least in the U.S.) you don't see a single MV-to-LV transformer connected line-line (as opposed to line-neutral) unless for some reason you don't have a neutral to connect to.
Incidentally, in the suburb of metro Washington DC where I reside, the above ground 4-wire MV distribution uses 34.5 kV line-line, 19.9 kV line-neutral. I think this is near the practical (safe?) limit for line-line MV distribution voltage level. Sincerely,


Yes, a while ago they implemented a semi-experimental program where they used a voltage in that range (I think it was 34.5 kV) for local distribution in an area of Saratoga County NY. Big ugly insulators. There were some very old transmission lines with voltages in that range that fed substations. Where this area was fed it went directly from one of those lines through a set of regulator transformers (big pole pigs) and a recloser or something right to the street lines. No substation like you'd normally see used.

This is what we see here 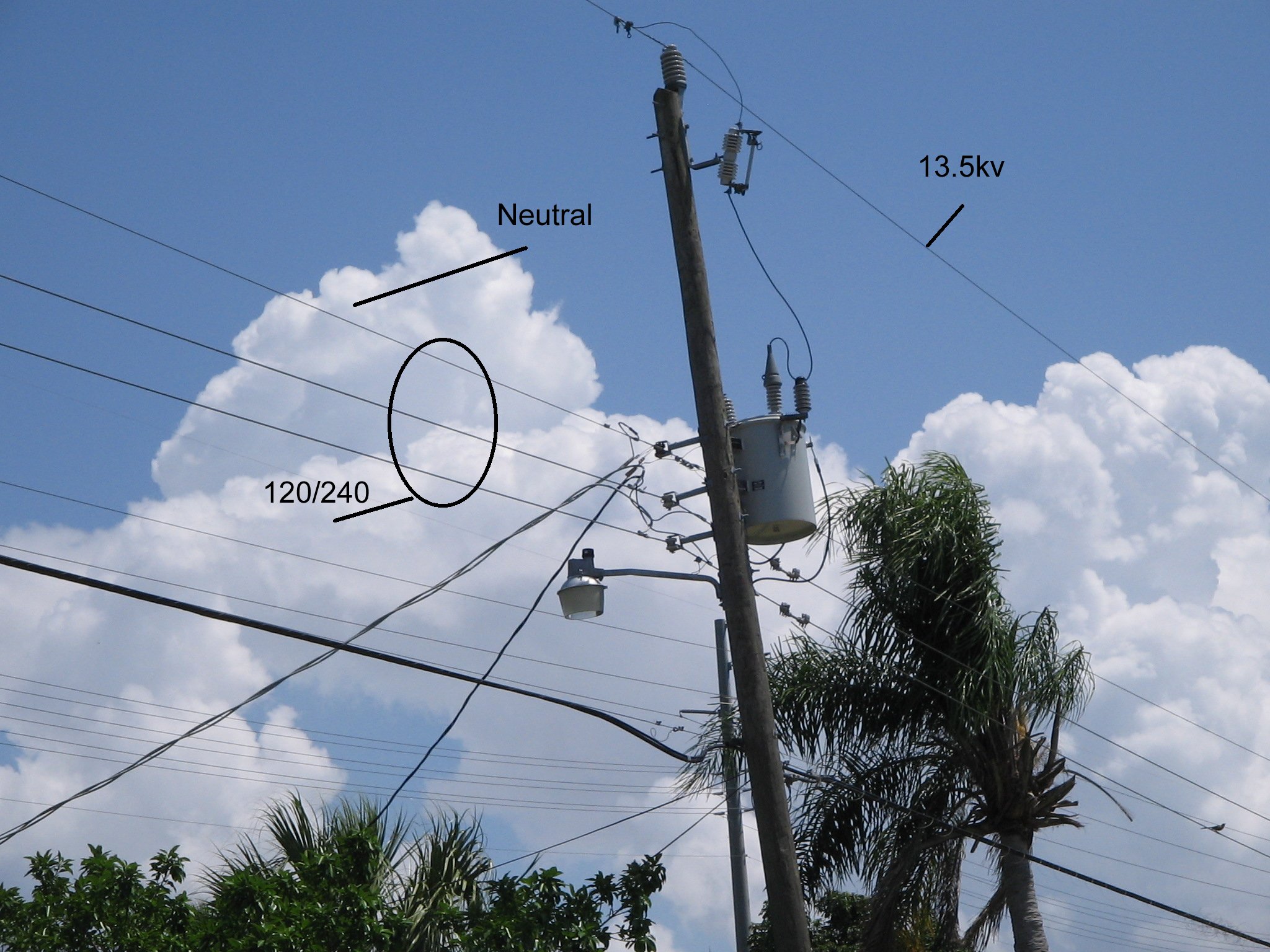 http://gfretwell.com/electrical/transformer.jpg
This is the transformer 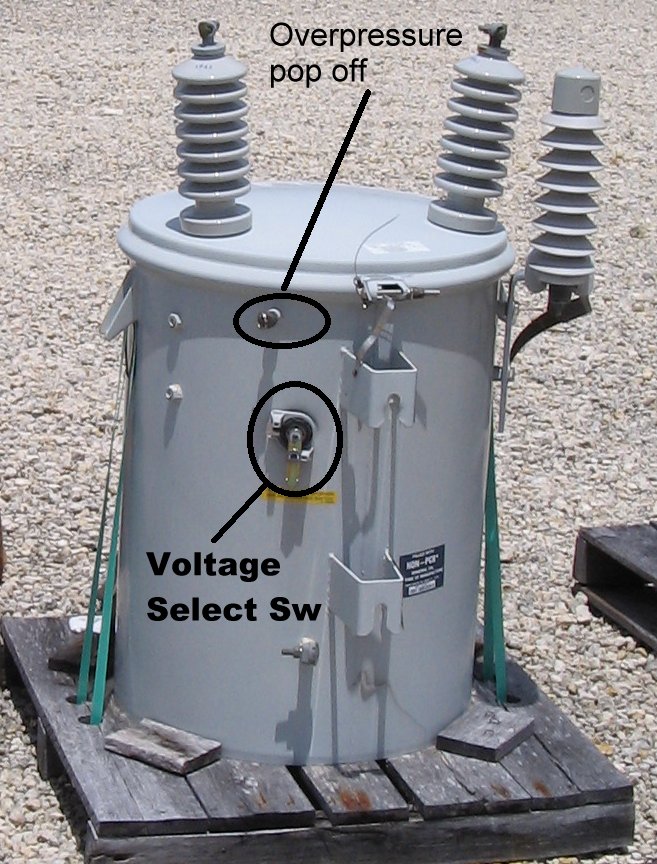 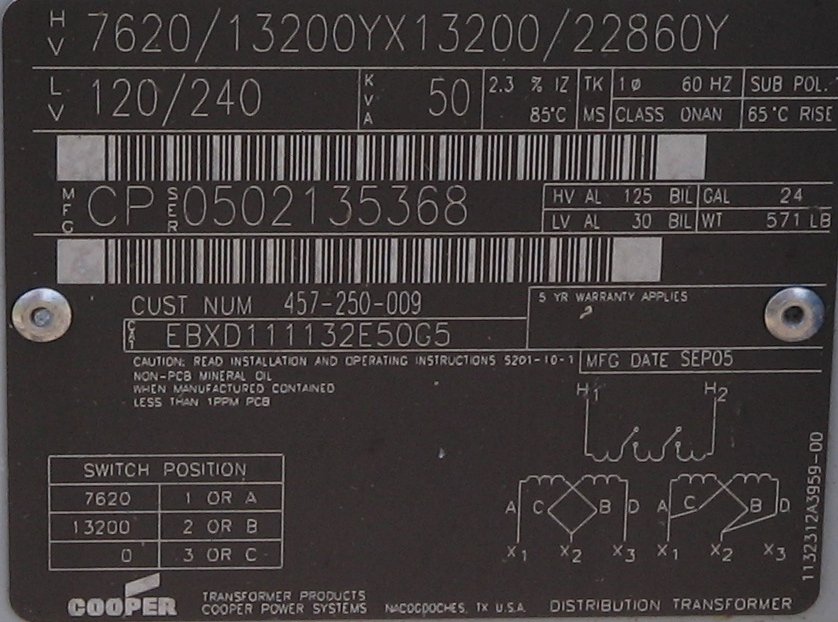 When the one on the pole gets blown up be lightning, they will replace it with one like the one on the ground. ;-)
That was just the spare they keep at the power station at the end of the street.

Contrary to my previous post there actually are two primary insulators on t he pole transformer. One of them is almost hidden behind the pole (zoom in to see it). So the transformer on the pole is indeed the same and the tra nsformer on the ground.
What, if anything, is connected to the insulator behind the pole? If the c onnection diagram on the side of the transformer is correct, *something* mu st be attached to that insulator. But I don't see any wires in the photo t hat could connect to it.
In any case I withdraw my previous post.
Neal McLain aka Texas Cable Guy

Here is a better picture of that transformer, showing the connections. You see one primary goes up to the 13kv line and one goes down to the neutral. 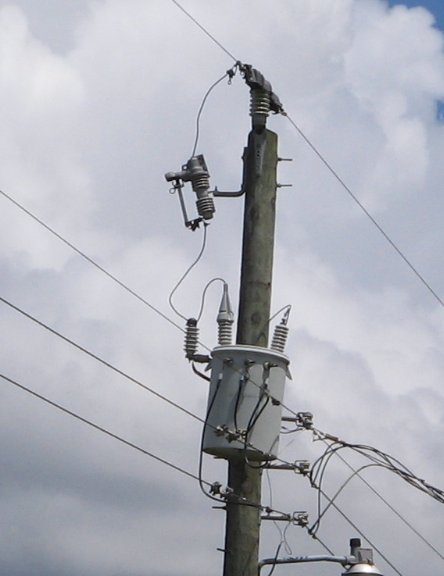 Much better photo. Thanks.
Neal McLain