I've been looking for a running or repairable Miller engine drive welder for hobby use. There's an early '80s Legend for sale about 100 miles away, asking $700 OBO. Facts are scarce: It hasn't run in four years, looks fairly weathered in the photos and it appears the fuel pump has been bypassed. There's no suggestion it'll start, or even turn over.
Anybody got an idea what the scrap value is? That would give me a lower limit to offer. To the extent it can be tested/inspected I can go up from there. This is a recreational project, not a commercial one, so I can afford to be a little inefficient. If scrap value turns out negative, that's another story.
Thanks for reading, and any guidance....
bob prohaska


Thanks, I thought the copper might add a little, at least.
bob

Not unless YOU do the work to strip it out.
Lloyd


That's what I gather. I can afford considerable labor to fix it, but if parts are required the economics turn sour very quickly. Generator head trouble seems like it's unfixable. I gather engine problems can be fixed at a steep cost. Control circuit repairs are a bit cheaper and also rather common.
I'm hopeful that genset damage will be visible at standstill and gross engine trouble will show up when the engine is turned over by hand.
The plan is to pull the side panels and check for mechanical damage, look at the slip rings and check for toasted windings. I'm unclear where to grab the crank to try turning it over, the fan is the most accessible spot, not sure it's strong enough. If there's a hint of compression and no bad clunks or binds I'm guessing it's worth an offer.
The ad is at https://chico.craigslist.org/tls/5392284051.html if anybody cares to look. Somehow I don't think a stampede will develop.
8-)
Thanks for reading,
bob prohaska


It might be a working welder just needing a bit of attention, just like the seller says.
If the seller is not too far from you, go and talk to him. Your main question to resolve should be whether he is an honest man or not. Does he look like he has a lot of equipment to sell that he did not seem to use? Maybe he is selling some dog welder that he bought elsewhere, but tries to pass it for a welder that "they quit using"? Ask him what he used the welder for and see if the story makes sense.
Also look to see if the welder seems to have been used a lot. Look at the muffler condition etc.
I have a very similar propane powered welder, a Miller Bobcat 250. I bought it for $100 and it was badly damaged, looked like it fell off a truck at some point.
http://www.bidspotter.com/en-us/auction-catalogues/bscpp/catalogue-id-bscpp10019/lot-d5bee087-6119-417a-a3cc-a28e003b8a1a
The amazing thing was that the damage, which seemed very severe, did not affect literally ANY working elements or controls of this welder. My guy straightened the sheet metal (which was all included, though it is hard to see on the picture) and I bought a new bezel. Now we use it occasionally.
The point is that if you pay the right price, you might get lucky.
i


If the link does not work, here's a picture: 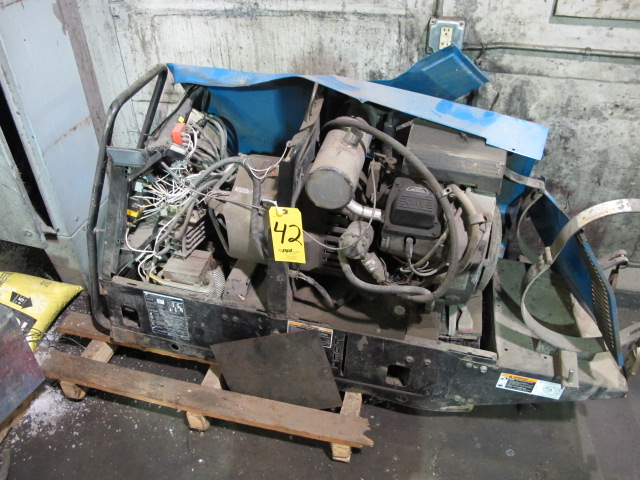 
That's an impressive photo! But, you can at least see inside 8-)
In the present situation I'd pay $100 with little hesitation, but such an offer is apt to produce more ire than progress.
If it isn't fried, turns over by hand and has a little compression I'm thinking $3-400 in the absence of large red flags. For each de-merit deduct $100. Sound reasonable?
Thanks for reading,
bob prohaska

Have you considered a using a portable generator and a buzz-box welder?
Thats the route i took when i needed a portable welder and could not find one that was reasonably priced.
Best Regards Tom.


If I were a rational buyer who _needed_ to do some welding that's the way to proceed. As it happens, I'm more of a hobbyist who enjoys working with old machinery. Time I have, money less but still some. The welders in Gunner's collection are magnificient, but far too big for my space. A Miller AEAD-200LE is already crowding things slightly.
By all acounts, if one really needs to weld, the modern inverter machines are better than old iron. I just happen to like old iron 8-)
Thanks for reading,
bob prohaska

Being retired myself i appreciate the joy of reserecting old iron and putting it back to work. Good luck on that welder, hopefully you can restore it to good working condition.
Best Regards Tom.

From what I understand, frozen engines (such as the Continental in the Lincoon SAE350 welder I bought a decade ago) are more cheaply and easily repaired by repowering it with a small, newer engine. I sold it As-Is for triple what I paid because I didn't wish to go into hock to repair it. Engine problems seem to be the reason most are sold on the cheap. (Oops, I'm thinking larger welders than your link.)

I asked the seller if it ran, and he said it had, but I failed to do the simple crankover to verify it. I urge you to NOT do the same.

Best bet: take along a spare 6v (or 12v) automotive battery and use the existing mechanicals to get it running, if possible. A can of ether helps, or spray some gasoline down the carb.

Bob, consider offering much less. (I dropped my asking price when I determined that it was frozen and a week's worth of Ed's Red wouldn't unfreeze it.)
If you want to make a trip to Gunnerland (near , he might still have that running Hobart (or Lincoln) welder on wheels you could simply drag home and start using. He had a good low price on it last October. <g>

At this stage I don't know whether it's siezed or not....
I'll bring jumper cables, but the seller is very coy about the present state of the welder. Even if it can be started, much can be learned by turning the engine over by hand; thus my question about how to get at the shaft. Access through the generator risks interference with the windings. The flywheel end offers little to grab hold of. A small bar through the fan looks do-able if the fan will take it.
The goal is merely to get a runnable welder, but I don't want to be sucked into spending a bunch of money to learn the generator is unfixable. I don't mind if it's junk, but would rather not spend a fortune finding out.

From what I could see on his site, the machines are physically too big for the space I have.

Thanks for reading,
bob prohaska

I don't know if that's a pull-cord or electric start, but take a battery and jumpers just in case.

Grok that. Did you require the larger gasoline model, or was that just a perq? There are lots of inexpensive used plug-in welders around most areas.

Yeah, the wheeled variety are heavy and large, wanting to run outside only. Of course, any gas model would like the fresh air, too.

The entire project is a perq 8-) I just happen to enjoy old engines and machinery. If they're got a trace of utility it's a plus.
bob


Let us know how it works out.
i


Well, since you ask 8-)
Took a look this morning. Basically the machine seemed like it had led a very hard life but was intact. It turned over easily, with just a trace of bounce on compression. There was a faint wheeze, probably crankcase ventilation check valves. Oil was full on the dipstick, gas tank was dusty & rusty. Slip rings seemed ok, looking about like those of a 6000 hour machine I'd seen previously. There was no sign of damage to the windings. The starter had been wired to an external battery, long since gone.
The first sign of trouble was much re-welding of the baseplate under the engine mount. It looked as if there had been considerable cracking, both in the welds and in the baseplate steel. First thought was that it had been dropped or hit, but no impact point nor sign of bending was apparent. Best guess was that metal fatigue caused the damage. The few Legends I've seen run were relatively smooth, so the cracking set off some alarm bells.
I was told it had come with the purchase of a used truck and been displaced by a later-model welder already on hand. It had been ignored for five years while business was good; now that things were "slowing down" time was being taken to clean up the shop. It had been test run by the seller but never used in production.
In the end we couldn't agree on a price and I didn't try very hard. The cracked frame really bothered me. The seller was asking $700 and said he had an offer of $550. I suggested $400 as an upper limit. The seller's retort was that he could fix it up and get $1000.
No harm done, the car needed the exercise and so did I. It was a beautiful day for a drive in the country.
Thanks for reading, and any thoughts.
bob prohaska

Sounds like you had a fun day.
If the seller could fix it up he would and get $1000. Most likley it has other major problems that won't show up until its started and some test welds are done. His story doesn't make sense.
Best Regards. Tom.

I think you read the bad situ and escaped alive. Goodonya, Mate!