Here, a few months ago, I wondered aloud what would happen if I clamped my saber saw underneath a work surface so that I could free up my hands to guide the workpiece. This would allow me, for example to do miter and notch cuts in steel quickly and accurately.
I tried it and found that I couldn't hold the workpiece down against the face of the surface for some reason. I jumped to the conclusion that I needed a larger 'orbital' blade clearance setting but even with that set for maximum 'return clearance' the work still vibrated uncontrollably. I wondered what could be the cause but vectored off to do other chores instead of engaging in any analysis.
This morning, a commercial on teevee revealed the cause. Our friends at Rockwell discovered that the blade was flopping laterally and have included an upper guide to minimize that. Apparently it works well enough, if very slowly, even in wood.
<https://www.rockwelltools.com/US/BladeRunner_Saw-P1564.aspx?utm_source=BRTV&utm_medium=TV
After watching the demos, I'm convinced that this approach won't work for me because of the swarf that will jam in the upper blade guide, causing damage to it in short order.
Still it is cool to see how they addressed the 'floppy blade' issue.
Now, I wonder how to make a large jigsaw that uses regular hack saw blades to do many of the things that the Blade- Runner is shown doing, without tearing up a blade guide in the process.
--Winston <-- Loves his bandsaw but it won't cut steel and decent blades are spendy!


Look up walking beam saw - though building a bandsaw (or modifying the one you have to cut steel - mostly a speed issue and the correct blades) might be as easy, and would cut faster (but it's harder to pierce with.) If you don't need maximum throat depth, bandsaws get much easier, as you can bolt two wheels to a post, rather than trying to build a rigid C frame (much like a jumbo shrimp or military intelligence.)

--
Cats, coffee, chocolate...vices to live by
Please don't feed the trolls. Killfile and ignore them so they will go away.

http://treadleit.info/sites/default/files/mainsite/OLDfiles/Scrollsaw-MillersFall-1886A.jpg
I guess they got replaced by the band saw.

Still looking for a 'worm transmission' after all these years.


Try a jackshaft - it's a lot more obtanium (and adjustable) way to slow things down for the home shop budget.
But McMaster will set you right up if you like - try "speed reducer" - $300-500, with a few outliers above that range. The right angle kind are worm gears. Page 1014-1015
Or these days, a VFD - you might easily get a 1-phase-in 3-phase-out VFD and 3-phase motor for less than a speed reducer, and have variable rather than fixed speed available. Just depends on how you care to go at the problem (and whether you have 3-phase handy, so you could just use a 3-in, 3-out version.)

--
Cats, coffee, chocolate...vices to live by
Please don't feed the trolls. Killfile and ignore them so they will go away.

Old roto-tiller -- a worm on the shaft from the engine drives a worm wheel on the tine shaft.
Also an old automatic stoker from a coal furnace. I've rigged several useful ad-hoceries from one of the latter. A 3450 RPM motor produces 6 RPM output.
Here's a use-once widget for rotating 3-1/2" thick-wall tube while beveling and then butt-welding: 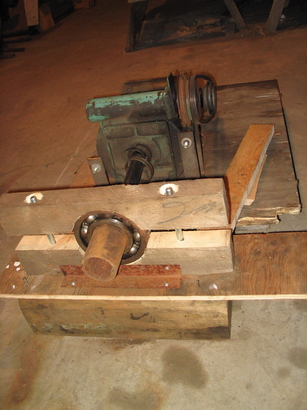 That's how I did it. https://picasaweb.google.com/KB1DAL/HomeMadeMachines#5339007508265721842
The wheels hang below the straight ladder frame, giving 13" of throat. The drive wheel axle mounting block with tracking screws is partly visible at the bottom. The sliding wheel is mounted in a U shaped frame that fits loosely within the side rails. Bolts through the frame take up the slack and adjust tracking. I had planned to mill down the axle mounting blocks as needed to remove twist but the welding came out good enough.
jsw

You need a workpiece holddown. Howzbout a rubber inline skate wheel on a stick, held from above, parallel with the blade direction?

Prolly holddown. The machine tends to vibrate and it's passed off into the workpiece, plus the effects of the blade cutting.

Oh, GAWD, I'm glad I dumped my DISH contract! I watched one of the little videos they had and instantly remembered.

Will a dust/swarf-collecting vac help?

Use a wire instead of a guide. Tension the upper end like a coping saw or scrollsaw.

Floppy blade. The workpiece resisted all attempts to seat on the table, despite a considerable amount of clamping pressure provided by yours truly.

"It came back to me like the hot kiss on the end of a wet fist." Thank you Firesign Theatre

Some. Not enough, though. One chip trapped between the blade and the bearing and it is 'bye bye guide', I conjecture.

Yup. The guide bearings damp the wobbly oscillation of the end of the blade. The foot shown would have been quite inadequate to resist the 'workpiece hop' I saw, sans blade guides.

Neat looking saw. Not 'general purpose' enough without a table, though.
--Winston
-- I see the Kitchen in splotchy black granite based on a "Pink Floyd meets the 50's and 60's" theme.
Think 'Shoo-Wap Doo-Dah Ummagumma UbaTuba'.

Wimp! Pop off two secondary handle mounting screws, mount a table you fab up which sits in the vise when necessary. This is opportunity knocking, Sir Winston!
-- Win first, Fight later.
--martial principle of the Samurai

Heck I'd rather put a worm transmission on my existing saw then build a 12/18/24 TPI version of this delicious thing:
http://www.youtube.com/watch?v=q0I_py2zq70&feature=related

That surprises the heck out of me.

Spiffylicious!
-- In the depth of winter, I finally learned that within me there lay an invincible summer. -- Albert Camus

(...)
Me too, since the same blade cuts through steel really nicely when the workpiece is clamped in a bench vise and the saw is guided by hand.
(...)

Are you absolutely sure it's not caused by vibration of the workpiece? If the piece is hopping, it could -induce- a waggle, oui?
-- In the depth of winter, I finally learned that within me there lay an invincible summer. -- Albert Camus

I haven't seen any high speed video, but you are probably right.
Probably the first stroke of the blade goes well then *any* contact of the blade to the workpiece on the return stroke induces movement in the handheld workpiece, which causes the largely undamped blade to 'violin', side to side.
Once this lateral oscillation of the blade starts, cutting just about ceases as the workpiece gets trapped by the displacement caused by the resonant standing wave in the blade. (It doesn't really matter if it is fundamental or harmonic resonance. A dynamically floppy blade is effectively wider than the kerf at most points along it's length.)

At that point, the workpiece spends much of it's time riding the blade.
So the guides dampen the oscillation of the blade at it's resonant frequency. The blade remains 'straight enough' laterally and therefore does not trap the workpiece.
The blade probably still oscillates laterally when it cuts a clamped workpiece and the saw is hand held. It does not approach resonance because the base pressure of the saw against the clamping device (vise, workbench) prevents the workpiece relative movement that causes blade lateral resonance.
A first - order test would be to clamp a workpiece in a vise and attempt to cut it with much less base force than usual. I suspect that the lowered mass coupling would cause the blade to enter resonance at some FPM and pressure settings, resulting in a bouncy ride for the user. BTDT (Queue SFX: "trombone gobble")
That is my story and I'm sticking to it.
My take-away: What if you made a 'virtual' top guide, immune to swarf? Several displacement sensors and electromagnets dynamically phase - cancel lateral acceleration of the blade, straightening it in real time.
--Winston

Question: Why would it be so bad upside down when it isn't right-side up? Could it be the addition of the table thickness? Pull the shoe and mount the beast to the new, thin table. Let me know how it works.

Ayup. I've felt that with the recip saw many times. The 12" blades are the worst.

Drill the tip of the blade, run a guitar wire through it, and support it at the top. It should end your troubles. Use the beaded end on top so you can drop a holey piece on it for further cutting.

"base force"? Or run a ball bearing holddown right next to the blade, springloaded at the top. But if it's a positional resonance, that prolly wouldn't help. The original shoe is probably tuned to the zero point of some wave already, probably at midspeed on a variable.

All the way to the San Josie Sanitarium, eh?

Quick, cheap, and easy. You'll have it done in half an hour, wot? Hurry, the patent office closes at 4 on Fridays.
-- In the depth of winter, I finally learned that within me there lay an invincible summer. -- Albert Camus

[A lot about this not working due to blade vibration.]
I don't know what's going on here: maybe 15 years ago I mounted my sabre saw upside down under a table and it works fine. Yeah, I have to be careful about it grabbing, but it's not a big deal to hold the work tight against the table.
The saw & blade are nothing special: a 30 year old Craftsman saw and a no-name blade.
Just another case of mileages varying, I guess.
Bob

(...)
Read on. I agree with you that relative movement between the workpiece and saw blade appears to prompt lateral oscillation of the blade and results in grabbing.
With 'His Stockiness' holding the saw conventionally, there does not appear to be enough relative movement to cause much oscillation, so very little grabbing results.
A foot alone couldn't provide the necessary force and still allow the user to easily direct the cut.
(...)

And a Sawzall into a steel bolt clamped in a vise can really teach you some dance moves, if you attempt to use an unworn part of the blade.
(...)

That is the BladeRunner approach except for the spring loading. It does appear to work OK. It ain't fast, even in wood, though.
(...)

More highly paid men than you have tried that one, Larry! They had to answer several Embarrassing Questions. :)

I Can Over - Complicate Anything!
-- His Stockiness

Vertical or lateral? You didn't specify, so I took it to mean vertical separation between the table and workpiece. Wait a minute, you just said "workpiece and blade". How is that happening? If it's sliding up against the side of the blade, it will begin oscillation. Gitfiddle wire'll fix 'er right up, overcoming that tendency.

How thick was the additional table when you tried it upside down? I don't think you addressed that.

Try cutting a sink out and find a subterranean tubafore lurking a couple inches below the substrate. Instant pogo stick, all the way to the top of the counter. <sigh>

I doubt it would take more than a dozen pounds. Give 'er a try.

No. Bandsaws are light years ahead for speed in wood/metal cutting.

Talk to Bill over on the Wreck. He's one up on ya. ;)
-- In the depth of winter, I finally learned that within me there lay an invincible summer. -- Albert Camus