Convert any r/c platform into a robot.
www.endurance-rc.com/pctx.html

I had to click on a bunch of links to fully understand read what the product was about (found someone on the tutorial page).
You may want to provide a bit more basic description on the product pages as not every random visitor will immediately know what your product does. These interfaces seem pretty cool, and it would be a shame if people came by and left scratching their heads.
-- Gordon

Ditto.
You also might want to provide a download to the api, or at least some details on how the api is used (i.e. some sample code, and a download or at least a price if it's not free to download) so that we can see how useable the api is. I would like to buy this product if it does what I "think" it does, and if the API is written well enough to do what i want it to do.

I liked the idcea of an API, but a C++ API (I assume some static library) will severely limit this application, IMO, and only a select few will ever use it. For the PC, they'd get the widest market offering it as a dynamic DLL, which could then be used by most anything. They should then consider adapting it as a managed class for the *growing* number of people writing in VB.NET and C#.
-- Gordon


Exactly what I just did. Saw a box with two wires, couldn't figure out what it was in 2 seconds so I left. :)


Click to see the full signature.
Hey guys,
Ive made some updates to the site that hopefully better answer some of your questions. Thanks!
http://www.endurance-rc.com /


That's much better. I at least get an instant idea what the box does. But your page makes it sound like it hooks to the PC with an interface called PCTx. I don't have a PCTx port on any of my computers so my first thought is that this product is not something I could use. My thought was that this new type of port I had never heard of must be some standard R/C interface I didn't know about. However, having doubts, I started to search your web site - because I suspected it was actually just a USB port instead of a PCTx port. It took me a good few minutes reading every page before I concluded that it in fact hooks to a standard USB port and that your box was called the PCTx. But even after many minutes reading the site, I was not sure about this, because no where do you say, "it hooks to the PC using a USB interface". If it connects to a computer, it could be using a serial port, a parallel port, an Ethernet port, a PCI card slot, a firewire port, a PCcard slot, an IR port, a wifi port, a bluetooth port, or who knows what else. There's no reason at all you should expect people to assume it's a USB device.
A search on the web found this web site about the product:
http://www.rcuniverse.com/magazine/NewProduct.cfm?product_id 06
Notice how they put a title on it that says: "USB PC to RC Interface". See how clear it can be? 5 simple words that tells me exactly what the product is. Something I still couldn't figure out for sure after reading your entire web site.
Ah, something else I just noticed which I was confused about. You seem to be selling a separate product that looks almost the same, but controls 8 servos directly. I assumed this was just another application of the same product. It's not clear at all that these are two different products you are selling. And I'm not even sure if I'm correct about this - maybe you just load new firmware into the same box to make it control 8 servos directly? See how confused your web site has left me?

Looks better, but run a quick spell check.
Do consider my other suggestion about offering your SDK as a compiled dynamic library, for those who don't program in C++.
-- Gordon

Curt,
Sorry, I will try to make the connection scheme a little clearer.
The product is named PCTx. It connects to a PC using the USB port.
The servo controller is almost the same as the PCTx except they have a few different changes. Firmware is different as you said and the power system is also different. The servo controller requires an external power source since the USB port cannot supply enough juice to drive 8 servos.
It looks the same because I'm using an identical case on both prototypes. The production case will be all black and a little smaller.
The servo controller plugs into the USB port just the same as the PCTx except it is a dedicated servo controller that needs to be attached to the computer. The PCTx will allow you to basically have a wireless servo controller by employing a regular R/C transmitter. Or you can just set it up with an r/c car or boat with little modifications. Robot building is where these devices really come in handy!
Robert,
The software IS fully customizable. There is C++ and Visual Basic source code available. I have an online API up for the C++ code and VB online API will be up shortly.
Gordon,
I took your advice and got a VB.NET example program going. Im working on a dll and I will keep you posted on its status.

Great to here some feedback. I'll keep your site under watch for updates. Looks like your product is just the sort of starting point I need to Build/Test my own robot platform.
Keep in touch.

PCTx units are shipping now.
I will also be adding my newest project to the site sometime this week: a tele-presence r/c car. Web interface is coming soon.

I've hooked up a few servos to make a pan/tilt system that moves a wireless camera. I set up a pretty cool way of control that is similar to a first person shooter game.
See it here: http://www.endurance-rc.com/media/cam_test.wmv
I'll get a few more videos up in a few days of the whole system running.
-Phil


So... once I hook up my PC to your inteface, I can use my Flight Simulator joy stick to do what you show on your clip? Which means we have added another two servos?
I'm really getting excited about what you are creating.
Wayne


Yes you can do this, and with any other pc input device for that matter. As of now the software is only supporting the mouse since this is a pretty universal peripheral and everyone already has it. If the joystick software (or some other existing software) can manipulate the mouse pointer directly, then you could do that with the current software I have written without modification. Most likely, it would require some custom programming around your specific input device though.

Yes, for pan and tilt.

heres a few pics of the car: 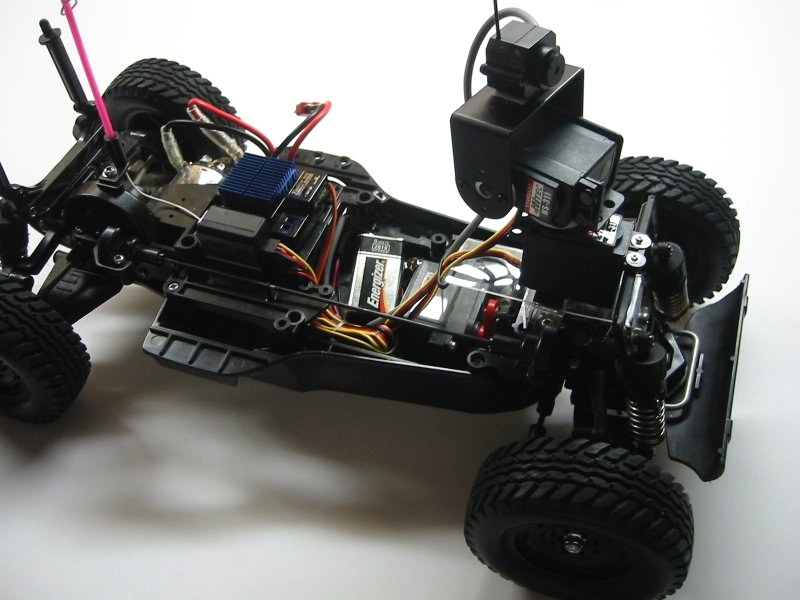 http://www.endurance-rc.com/media/carlynxpan.jpg
This is an older version: 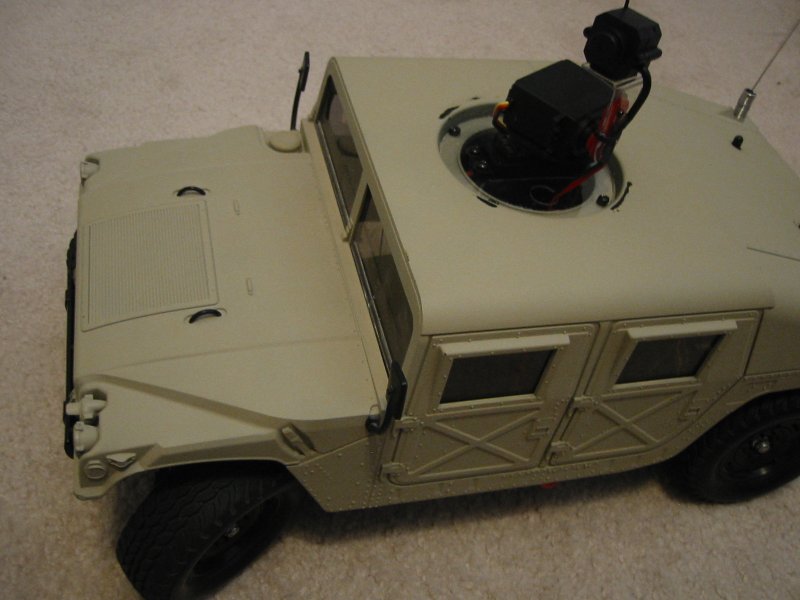 Ok big update here!
I've got the head tracking video goggles working now. I still need to do a lot of tuning but this video will give you an idea.
Head tracking demo video:
http://www.youtube.com/watch?v=4RfmbwsM7go

Thanks for looking!
Endurance wrote:

Hey the product looks good. It just enables the computer to use the buddy/trainer terminal on most RC controlers. This could help with beginners who need to test programs but need to cut in on thier PC's when the robot/vehicle gets stuck in a corner/function or maybe get's too far off course. It would also help if there was an option for the PC interface to come after the RC controler.
Remote Control - Personal Computer - Vehicle/Robot. Then one could use the RC controler to instruct an onboard Computer like a Mini ATX board.
I've got an old Futaba FG unit with the trainer jack. Your USB modual would be of some real use if I needed to control an RC Car/Plane/Boat. However the RC controler needs a person to hold the overide/trainer switch in order for your interface to work. I guess I could replace the switch with a normal throw on/off instead of the spring loaded momentary on it now has.
Another thing is you'll need to let people customize your software so they can use thier own Joystick/Mouse/Keyboard Controls. Your Slide Bar interface would be good for testing but kind of impracticle for real time control.
I'll keep checking out your site. Good Luck. Your off to a great start!