i d like to know how pic controllers sent data via output one pin is setting as output and 0 is +5 volt and 1 is 0 volt i d like to know the way that happens when set a pin as output is giving +5 volt until a 0 digit is being sent ???? somebody to explain me the way of 0 and +5 thanks

Are you talking about sending serial data?
Connecting to RS232 as +5/0V from a PIC the signal is inverted, it's typical for TTL.
regards, colin

(Remove the "No Spam" to reply by email!)


But valid sigal levels start at around 3V (as the Wikipedia article points out) - it is quite possible to transmit and receive RS232 with a PIC - I have a servo controller on a 16F84 that has a simple serial interface. I have yet to find a serial device it won't work with. (and yes, negative swings are caught by the built-in diodes on the ports) Deep.

[snip]
Deep:
What you say is correct, but if you claiming to adhere to RS232, your transmitters need to start with +/- 12V. Less than +/- 12V at the transmitter puts you into "RS232 compatible" space:
A common deviation from the standard was to drive the signals at a reduced voltage: the standard requires the transmitter to use +12V and -12V, but requires the receiver to distinguish voltages as low as +3V and -3V. Some manufacturers therefore built transmitters that supplied +5V and -5V and labeled them as "RS-232 compatible."
Your practice of using the built-in diodes on the parts to clip negative voltages is not recommended. The spec. sheet for PIC's specifies a voltage range of -.3V to Vdd+.3V. -12V is way below the specified voltage range. You are welcome to continue the practice, but other people who want to operate their parts within published specifications are encouraged use alternative circuits.
If the MAX232 is too expensive, there is clever alternative circuit that I first saw implemented by the Basic Stamp II. The following schematic:
< 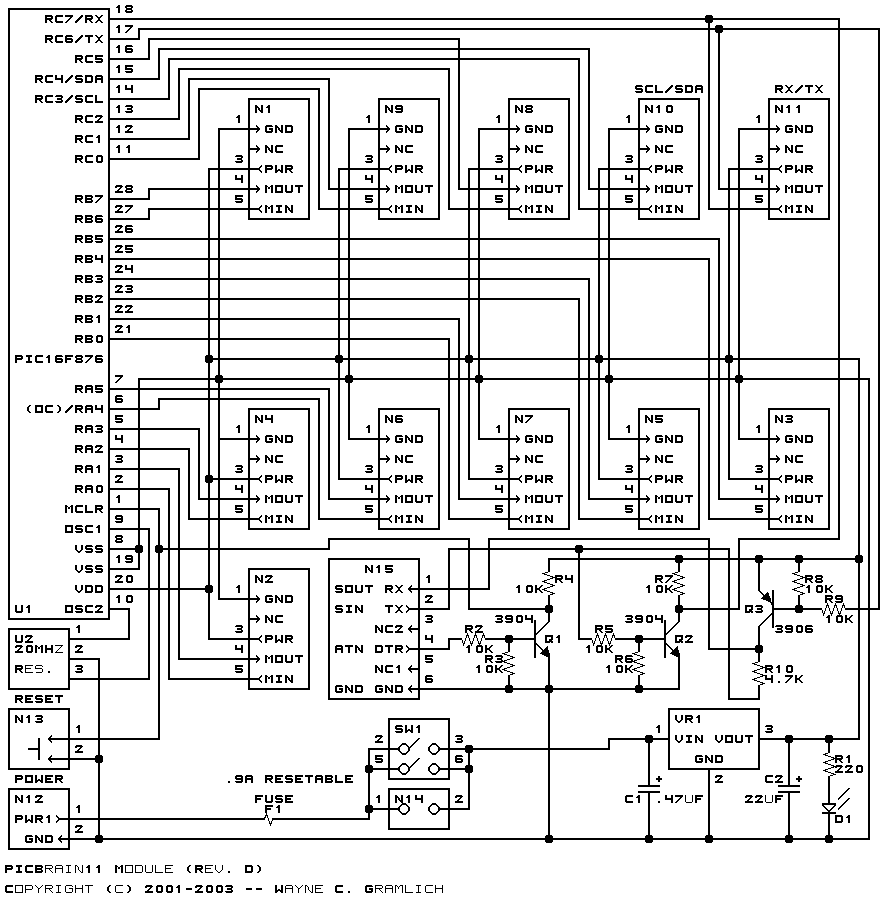 http://gramlich.net/projects/robobricks/picbrain11/rev_d/picbrain11.png
implements the circuit. It is pretty clever in that it uses the host device to provide the negative voltage. It is only three transisters (Q1-Q3) and some resistors (R2-R9). N15 is the DB9B connector. If you do not need the DTR signal, one of the transisters (Q1) and 4 resistor (R1-R4) can be eliminated.
-Wayne

ARM competes with MicroChip and Zilog . But all those who own PIC and Zilog are hooked because of the software .
They can't switch to ARM ( 10 times more power and abilities , at same cost ) Because of their software .
ARM burns less power . Its speed*power product is mch higher . Thus slow its clock and accomplish EXACTLY same task , at much lower power . At 20 microamps , ARM does same task as PIC at 1 mil amp . ARM has a 8KB loader . I have lots of work to do , at first its all software , then hook hardware to STR912FW44 or STR710FZ2 Wholesale is about $8 ...
I will hook a tiny square Lit-Ion battery and make my own state machine and crude key switches , and pop this in my pocket and develope my software , on the way to the office ....
There is no faster and lower cost method .
PIC and Zilog and Rabbit will cost you much more and have too many excuses ... I dont sell , i am a hobbiest , i have 12 NDS Lites and 6 EVB's ( i rip the Headers and CPU's ) , 10 fast BW CCD cameras and RF bridges and homemade "PDA" to DIY , i will DIY , i dont need to be detoured from my goals with : PIC , Linux , C/C++ , "DevTools" , nor compilers , nor assemblers , nor other broken promises .
I dont sell , so when i get some low level s/w DIY's , i'll give it free , but only for ARM .
Everyone is doin it wrong , today ..
____________________________