Flanger signs or snow plow markers were often used to warn plow crews lift the flanger between the rails or raise the side wings because of an upcoming obstruction which could be obscured under snow. Obvious obstructions would be road crossings, guard rails, turnouts and crossings; what are example of other things which would need protection?
Were they usually left in place year-round, or were they re-installed each season? You'd think that they'd stay in place (there doesn't seem to be any harm to the railroad to keep them in place), but this source calls them "temporary" http://tinyurl.com/22eamt ). By requiring them to be reinstalled every season, was that a way to make sure that any new obstructions along the right-of-way (which would clear passing trains, but not an extended plow blade) weren't missed?
I see that Creative Model Associates offers HO flanger warning signs (http://www.walthers.com/exec/productinfo/363-1028 ). Does anyone know what shape their flanger signs are?
____ Mark Mathu The Green Bay Route: http://www.greenbayroute.com/

AFAIK, they were permanent signs on the CN and CP. I noticed them many times when I lived in Alberta.


Yeah, that's a good example I didn't think of.
Was clearing the flanger part of the reason why cattle guards had that distinctive sloped shape? See: 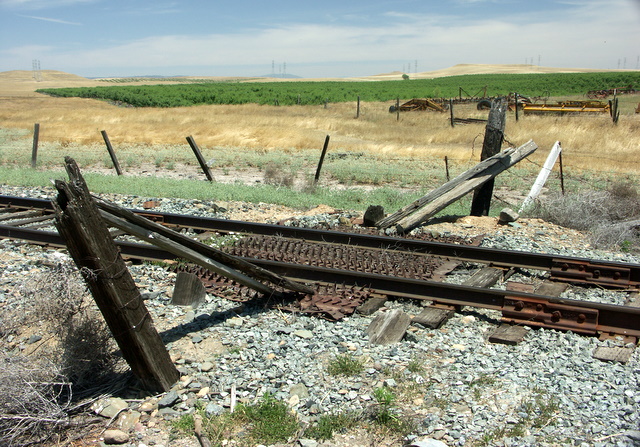 
Might have been one reason, but it's probably more the fact that it's the cheapest/easiest way to build a cattleguard. (Note that cattleguards in arid locations that never saw snow were usually built the same way.)
Note also the lower right corner of the picture referenced above where two different sizes of rail are joined together with "two story" fishplates!
-Pete

Yep, and I've seen that same slanted cattleguard across roads. No rails anywhere nearby.

Yep, and I've seen that same slanted cattleguard across roads. No rails anywhere nearby.

--
I wonder if the slanted triangle is mainly a means of providing support to
the fence. Considering the stress that end post must be under, it would