Just saw this article on Rocketplane XP, which plans to offer suborbital, tourism rocket flights, while using jet engines for take- offs and landings:
Rocketplane reset by Jeff Foust Monday, November 5, 2007
The revised Rocketplane XP design (above) is intended ultimately to be more competitive in the emerging suborbital space tourism conference. http://www.thespacereview.com/article/994/1
The Second Space Age. March 6, 2008 Patrick Mahoney "Ready for a space cruise? The technology is taxiing to the runway." http://machinedesign.com/article/the-second-space-age-0306
Rocketplane XP's current design was modified from the original Lear Jet base airframe but still has the look of a passenger business jet, with a rocket in the tail. It has some titanium and steel portions to withstand the heat of reentry in addition to an aluminum frame. This makes it heavier than a Lear Jet and it has to use a long military base runway for take-offs and landings. However, quite likely if it used all composite materials, as does SpaceShipOne, to replace the heavy steel, titanium, and aluminum it could take off and land from a standard sized airport runway.
Bob Clark

The Europeans have also proposed a business jet model for a suborbital tourism rocket:
DATE:14/06/07 SOURCE:Flightglobal.com PICTURES: Astrium aims for 2012 suborbital tourism flights. By Rob Coppinger "The space jet will take off from a conventional runway, powered by two jet engines, and fly to 39,300ft (12,000m), where it will ignite its liquid oxygen, methane rocket engine providing an ascent acceleration of 3g. After 80s the jet will reach 196,000ft and coast to its apogee." http://www.flightglobal.com/articles/2007/06/14/214632/pictures-astrium-aims-for-2012-suborbital-tourism-flights.html
Interestingly, they consider this as a precursor to a point-to-point transport.
Another article on the proposed Astrium rocketplane:
Space planes 'to meet big demand'. By Jonathan Amos, Science reporter, BBC News Monday, 17 March 2008, 13:38 GMT "Aerospace giant EADS says it will need a production line of rocket planes to satisfy the space tourism market." http://news.bbc.co.uk/2/hi/science/nature/7298511.stm
There is a link to a nice video of a simulated flight on this page. In the video the passengers are wearing helmets with closed visors. But it doesn't look like they are wearing actual spacesuits with independent air supplies because the helmets are not connected to the rest of the suits. The helmets have more the look of motorcycle helmets. I don't know if this is really supposed
Bob Clark


In this animation of the SpaceShipTwo suborbital flight, the passengers do not appear to be wearing actual spacesuits, though they do have helmets:
Virgin Galactic SpaceShipTwo Animation.
http://www.youtube.com/watch?v=Cw1WaW8JsFs


Another suborbital tourism project was posted on the SpaceFellowship.com forum:
Project Enterprise. http://www.european-spacetourism.eu/index2.html
I noted in their simulated video of the trip, it has the passengers wearing oxygen masks.
Bob Clark

This site is an informative compendium of articles related to space flight, and particularly space tourism:
SPACE FUTURE. http://www.spacefuture.com/home.shtml
Here's an article re-printed on the site on commercial orbital and suborbital flights:
New Commercial Opportunities in Space. D M Ashford The Aeronautical Journal, February 2007. "Of aeroplanes that have actually flown, and with the possible exception of SpaceShipOne, the one most suitable for providing the basis of a space tourism industry is perhaps the Saunders Roe SR.53 rocket fighter that first flew in 1957. This is probably the most practical rocket-powered aeroplane yet built. If it had entered service, the RAF would soon have had a mature rocketplane with long life and rapid turnaround. With straight-forward development, the SR.53 could have had sub-orbital performance. Indeed, when it was cancelled as a fighter in 1958, Saunders Roe did propose a space research variant(17)." http://www.spacefuture.com/archive/new_opportunities_in_commercial_space.shtml
Note that that the example of the Saunders Roe SR.53 shows that an aircraft can successfully operate with both rocket and jet engines.
Bob Clark 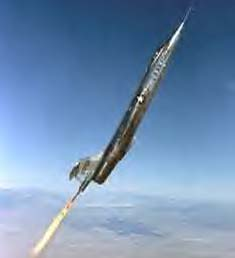 
The launch of a military satellite at the NASA's Wallops Island facility in Virginia reminded me that commercial launches are also being made from the site:
Mid-Atlantic commercial spaceport makes 1st launch. Posted 12/16/2006 7:20 AM ET http://www.usatoday.com/tech/science/space/2006-12-16-commercialrocket_x.htm?POE=TECISVA
There was a push by some to offer a prize for a suborbital commercial transatlantic transport to launch from the site but I don't know if that is still being considered:
Hypersonic Cruise for the V Prize. Wednesday 2008.01.23 by gravityloss http://gravityloss.wordpress.com/2008/01/23/hypersonic-cruise-for-the-v-prize /
This article did not optimize the cruise velocity to get the best fuel fraction and gets a too high cruise speed of 6,000 m/s. A later article on this web site discusses how this could be optimized, giving a cruise velocity of only 3,000 m/s if you can get a high lift/drag ratio of 7 at hypersonic speeds:
Optimum Rocket Cruise. Friday 2009.03.20 by gravityloss http://gravityloss.wordpress.com/2009/03/20/optimum-rocket-cruise /
Some hypersonic waverider shapes can get a lift drag ratio in the range of 6 to 8 when optimized for a set hypersonic cruise speed:
Waverider Design. http://www.aerospaceweb.org/design/waverider/waverider.shtml
If the delta-v required is only 3,000 m/s this could be obtained with a rather low mass ratio: Mi/Mf= exp(delta-V/Ve) = exp(3,000/3600) 2.3, assuming an exhaust velocity Ve of 3,600 m/s, which can be reached by kerosene/LOX rockets. This is less than the mass ratio of SpaceShipOne.
Bob Clark

Saw these articles linked on the Wikipedia X-33 page:
Lockheed Test Flies Space Plane Prototype. By Leonard David Special Correspondent, SPACE.com posted: 24 April 2008 11:41 am ET "Lockheed Martin has tested a prototype reusable launch system by flying a sub-scale flight demonstrator from the site of New Mexico's proposed Spaceport America. "The successful test flight of the proprietary vehicle took place in December and was only recently disclosed. A company official said Lockheed Martin is planning more tests using ever-larger vehicles. "Lockheed Martin Space Systems teamed with launch provider UP Aerospace of Highlands Ranch, Colo., Dec. 19 to conduct a small demonstration launch at Spaceport America in southern New Mexico to evaluate proprietary technology the company currently has under development." http://www.space.com/businesstechnology/080424-lockheed-spaceplane-test.html
Lockheed loses prototype of Space reusable launch vehicle. 18 August 2008 "Golden, Colorado: Lockheed Martin's second test flight of a prototype reusable launch system failed with the craft going out of control and becoming seriously damaged, rendering it unusable. The test, conducted 12 August, saw the winged craft take off from a launch rail under its own power and fly for some 12.5 seconds of a planned flight of less than a minute before it crashed." ... "The 200-pound (91 kg) vehicle reached its planned altitude of roughly 1,500 feet (457 meters). It is 8 feet (2.4 meters) long with a wingspan of about 6 feet (1.8 meters) and is roughly one-fifth in scale. It is being flown to develop techniques and procedures for quick launch, ease of operations and low cost access to space." http://www.domain-b.com/aero/space/launch_veh/20080818_lockheed_martin.html
Anyone know what the scoop on this is? Since the Lockheed X-33 was canceled because of the relatively trivial problem (compared to the complexity of the rest of the system) of the composite hydrogen tank debonding, I'm inclined to think Lockheed solved that problem and it's a version of the X-33. The dimensions given though are small for it actually being a one-fifth scale of the X-33:
X-33 Advanced Technology Demonstrator. X-33 Specifications. Length: 69 ft Width: 77 ft Takeoff weight: 285,000 lbs Fuel: LH2/LO2 Fuel weight: 210,000 lbs Main Propulsion: 2 J-2S Linear Aerospikes Take-off thrust: 410,000 lbs Maximum speed: Mach 13+ Payload to Low Earth Orbit: N/A http://en.wikisource.org/wiki/X-33_Advanced_Technology_Demonstrator
If it is a version of the X-33, I wonder why it would now be classified. Perhaps Lockheed found it would be able to provide the suborbital troop delivery system wanted by the defense department. If so, it could also work as a suborbital commercial transport.
This article suggests the composite hydrogen tank debonding has been solved:
New Composite Hydrogen Fuel Tank For RLVs Successfully Tested. Huntsville - Dec 22, 2003 "A team of engineers from Northrop Grumman and NASA's Marshall Space Flight Center, Huntsville, Ala. Have demonstrated that a new, specially designed fuel tank made from composite materials can safely hold and contain liquid hydrogen under simulated launch conditions." ... "Fuel tank problems on the X-33 Venture Star project were critical to ending what was the last major new space transportation R&D program at NASA." http://www.spacedaily.com/news/rlv-03p.html
This article says XCOR, the suborbital tourism company, is developing a composite cryogenic tank:
An update on composite tanks for cryogens. More automation, improved materials bring composite fuel tanks for space applications closer to reality. Contributed by: Sara Black, Technical Editor Article Date: 11/1/2005 http://www.compositesworld.com/articles/an-update-on-composite-tanks-for-cryogens.aspx
Bob Clark


AFRL Seeks Reusable Booster X-Plane Ideas. Posted by Graham Warwick at 5/12/2009 2:36 PM CDT "Guy Norris alerted us to it a couple of weeks ago in Aviation Week, but the Air Force Research Laboratory has finally released its request for information on concepts for a reusable launch vehicle. They are calling it the Reusable Booster System (RBS), because the focus is on a fly-back first stage carrying an extendable upper stage. "The RFI's stated objective "is to identify potential operational RBS concepts, including a family of expendable stage variants, and feasible system development approaches." And it is a step towards a potential subscale X-plane demonstrator that could fly in 2017-18." http://www.aviationweek.com/aw/blogs/defense/index.jsp?plckController=Blog&plckScript=blogScript&plckElementId=blogDest&plckBlogPage=BlogViewPost&plckPostId=Blog%3a27ec4a53-dcc8-42d0-bd3a-01329aef79a7Post%3a3cea718e-0347-4d3d-bdfe-7a7a675f97de
Reusable Booster Integrated Demo – Concept Options Maturation Study. (RBID-COMS) Solicitation Number: RFI-PKV-09-01 Agency: Department of the Air Force Office: Air Force Materiel Command Location: AFRL - Wright Research Site https://www.fbo.gov/index?s=opportunity&mode=form&id=d3e825368b36760bf2ece9d87750ff98&tab=core&_cview=1&cck=1&au=&ck This is for proposals for a reusable vertical launch, horizontal landing unmanned booster to serve as the first stage of a two-stage-to- orbit (TSTO) system. The description seems to be tailored made for the X-33 suborbital system. I'm inclined to think intentionally so. Then this might open up funding for alternative methods for obtaining lightweight tanks for the X-33 such as the multiple cylindrical tanks method. It also would make possible a suborbital troop carrier or commercial transport system.
Bob Clark


More on the Air Force's "Reusable Booster System":
USAF Seeks Reusable Booster Ideas. May 14, 2009 By Graham Warwick "The plan is to conduct an integrated demonstration of technologies and processes culminating in a subscale X-plane vehicle that would fly by 2017-18 and take the concept to a technology readiness level of 6, ready to enter full-scale development. "AFRL has several ground-based experiments already under way involving structures, controls and systems for an operationally responsive launch vehicle. The work is focused on a reference concept for an unmanned vertical takeoff and horizontal landing reusable booster capable of turnaround in 24-48 hours and launch within 4-8 hours of a request." http://www.aviationweek.com/aw/generic/story_channel.jsp?channel=space&id=news/Reuse051409.xml
Spacelift Development Plan. http://www.acq.osd.mil/nsso/conference/briefs/HampstenSDP%20Public%20Release.ppt
Also from the Aviation Week article:
"AFRL's reference concept includes an integral all-composite airframe and tank structure that carries both internal pressure and external flight loads. The concept vehicle is powered by pump-fed liquid-oxygen/ hydrocarbon rocket engines."
The suggestion to limit the fuel to hydrocarbon rather than the higher energy liquid hydrogen probably stems from the fact that for this purpose the vehicle only needs to have a max speed in the range of Mach 3.5 to 7, as indicated by slide #5 in the "Spacelift Development Plan" powerpoint presentation. However, all three competing proposals for the X-33 liquid-hydrogen fueled vehicles, which needed to get to Mach 13+, probably could be adapted to use hydrocarbon fuel, for this Mach 7 max. proposal. This would be another method to effectively re-open the X-33 competition. The X-33. It's back on, baby!
X-33. http://www.astronautix.com/lvs/x33.htm