This may be good for a laugh for some of you.
I have a set of floats on the way to me, for snow use. Being impatient as I am, I decided I needed something for the mean time. You know, because waiting a few days was out of the question. So, I made a set of cheesy skis using cardboard shaped with coat hangers, and covered in packing tape. I know skis are supposed to be spring loaded to adjust angle, and not made of cardboard, etc, but this was a quick and dirty hack destined to fail, not a serious attempt. The floats are the serious attempt, and they're not here yet.
I used original slow stick landing gear to brace them to the plane, and fishing line from the rear mount points to the front wing mount to brace against collapsing. Total time for creation was about 30 minutes, total cost $0 dollars and expectations of getting it off the ground about 15%, with expectations of it flying decently at about 10%. Because I was worried about the cheesy skis and cheesy LG, I decided to run a LiPo instead of one of my A123 packs and to remove the camera in order to save weight, and reduce load on my ghetto skis.
I put the plane on the snow, and to my delight it balanced and didn't sink. Score one for the home team. I then powered up, and it slid over the snow for a few feet and lifted off. Sweet! I figured now that I was in the air with this added source of ill-planned drag, it was time to lose control and crash. Surprisingly enough, the plane had no such plans! It actually handled fine and was quite nimble, possibly due to the fact that it was a good 16ish oz lighter than the 36oz I'm used to it being. I flew it around for a while, amazed at how well it was flying and how powerful it was. While part of this powerful sensation was likely due to the new low weight, I suspect another part may have been that this was the first time I'd flown it with the new power system, which is more than twice as powerful as my previous setup.
After a few minutes of playing around, I decided it was time to land. This would be a good time to point out that my landing area is very, very small. When my plane weighs 36oz, this is manageable. When it's in the 20oz neighborhood, this is a bit more of an issue. Also, and this is pure speculation, it appears that the 60 square inches of ski area parallel to the wing (flat part only, not counting the curved tips) might generate a bit of lift. So not only do I have a much lighter plan than I normally fly here, but it potentially has added lift to boot. You know, to make landing in small spaces easier.
After 3 approaches on the lawn, each of which I had to bail on because I couldn't get it down in time, I decided I'd have to bring it down in the street, where it could float on without running out of room. This would have been a good plan, had I managed to get it below the power lines before getting it over the street. Instead, I clipped a power line, which did land the plane, although not nearly as smooth as I would have liked. No damage save for the skis popping apart, which can be fixed real quick-like with a bit of hot glue. I figure I'll try again, but in a bigger area next time.
All in all, for the amount of time it took, the fun I had and the lessons learned, I'm not unhappy with the results. It'll be interesting to see if I can get any success at all out of this setup before my floats get here and I get to do it right.
Oh, and I had to tape 4 AA batteries to the tips of the skis to get the CofG right, since I didn't have the weight of the A123 pack and camera effecting the CofG like usual.
All in all, it was really fun for a failure. Considering the cost and fun involved, I'd consider it a successful failure. So, it's with great pleasure that I present you with my most ghetto RC creation to date! http://tinyurl.com/99hy2q or 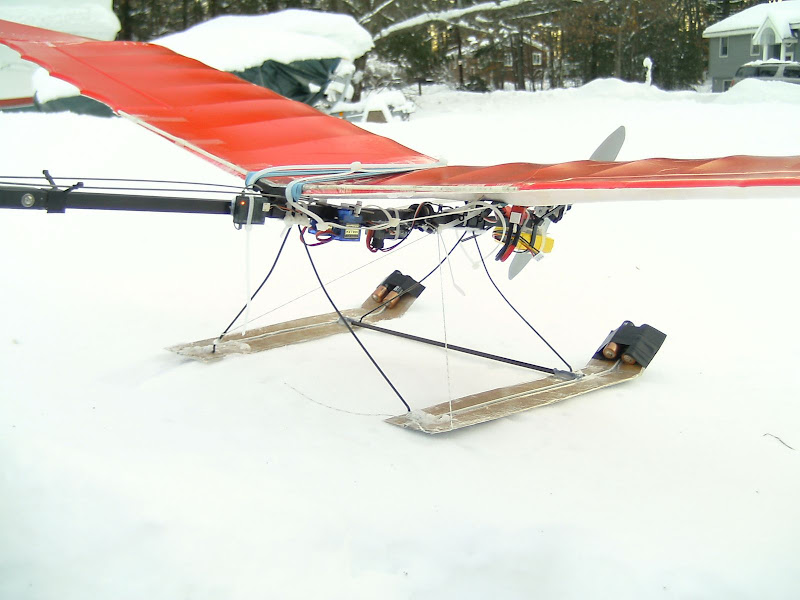 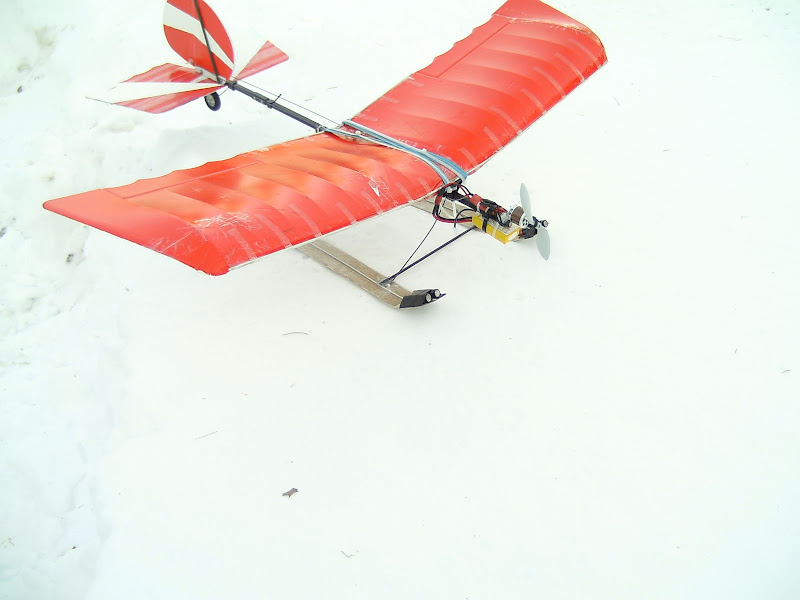 http://lh6.ggpht.com/_V7e3sdP0XyY/SVD9m7mKp4I/AAAAAAAABug/PXU07eL7dp8/s800/SS%20on%20ghetto%20skis%201.JPG
Plans for next attempt: 1) Bigger area. Much bigger area. Like a field, rather than my lawn. 2) Raise spreader rod. This wasn't an issue, but I can see how it could be. 3) Remove tail wheel. If I actually get to land it, I could see that being an issue as well. 4) See if I can use an A123 pack to set CofG so I can get rid of those AA's on the skis. Consider camera, but probably hold off on that until I have a flight that doesn't result in a crash.


Way t'go! I wouldn't see why you need to mess with the floats, really. ;-)
I made a set out of some aluminum sheet I had around, and they worked great.
One other possibility you may want to think about. Add a 1/4" square (or triangle) balsa stick to the bottom of each ski. It acts as a keel, and keeps it going more straight on the snow, and also, make sure you don't walk in the runway area. A small plane really has problems dealing with 14" long footprints in the snow! <g>


Thanks, and good tips. I'm determined to keep my runway footprint free for sure. I'm not too concerned about steerage though, the plane lifts off really quick and turns are not a problem. In fact, I ran some calculations this AM that told me wings are not necessary in my plane, as it's over 150W/lb. Takeoff is as short as I choose to make it. I'm just playing with these things until my floats show up in the mail.
Are your aluminum skis spring loaded, or fixed position?


The keel is so you can hold a line on takeoff, and not have the wind push you sideways. Without something on the ski to keep you straight, if the wind is very strong, you would need to take off directly into the wind.

It is a nose gear plane, so three skis. I have a piece of fishing line on the front of the ski, so it does not allow the tip of the ski to dig in. A relatively small torsion spring is wrapped around the gear leg and goes to the block the ski attaches to the plane, so the nose comes up in the air, but only a little.
On one side of the main skis, the ski is bent down 90 degrees to give it the keel effect, and on the nose ski, both sides are bent.