Is there any reason why this Lego set is selling on an average $250+? Over the past few weeks and currently being sold, there have been 50+ Millennium Falcon sets sold at Ebay and this has been going on at these prices for quite some time now. I really don't know if this is a supply and demand issue or not since i don't know how many collectors there are out there but have seen a lot of this set over the past year or so. To me it seems more like a hype thing then anything. I see plenty of other sets out there that are less seen for sale and they go for less money and they are just as nice. I have 2 of these Millenium Falcon Lego sets, 1 mib and 1 i put together so this isn't a matter of wanting to get one cheap, just don't understand why these prices have stayed so steady for so long. Maybe it's a good sign that certain Lego sets have a demand for them, i sure don't know...
solar


Similar story with the monorail set.


Excellent example... like I said elsewhere in the thread, some sets just have an evergreen appeal.
Kevin

Thanks for all the replies everyone, all the comments make sense. I could understand a Star Wars fan who had never put a Lego set together going and buying it. That makes the supply and demand factor change significantly with both Lego and Star Wars fans being involved.
I have only been collecting since 1998, so im still learning the Lego hobby little by little. I collect various things but would have to say Lego's and comics are the most interactive and fun things i collect.
vbenner snipped-for-privacy@wanadoo.fr wrote:

announced for 2004.
I look forward to seeing this set, which minifig's are going to be with the set?
Thanks again for all the replies everyone...
solar

I still don't know where a good one-stop 2004 pic reference is, but go here:
Scroll down to see one pic. At the top is a link to this one:
< 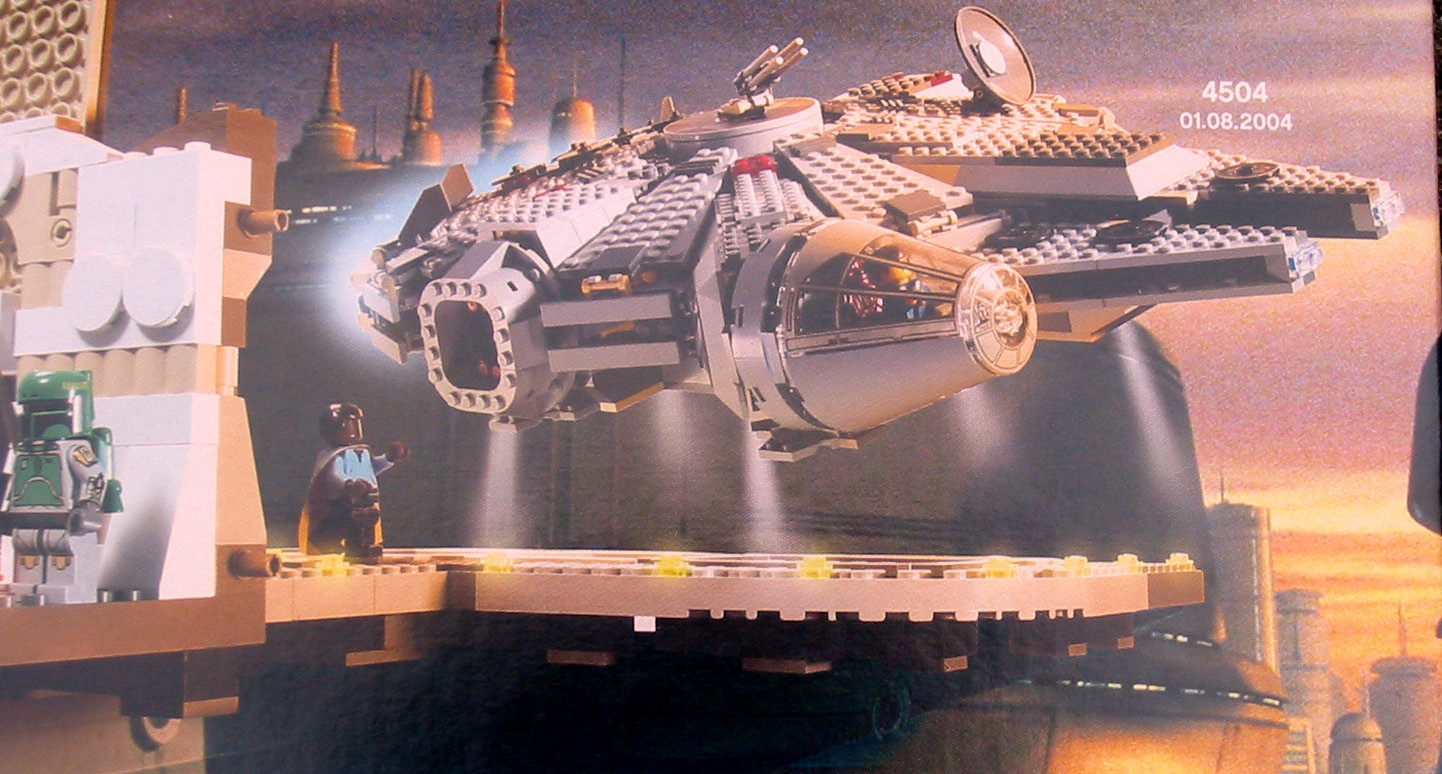 http://www.rebelscum.com/toys2/newfalcon.jpg
If I remember correctly, figures are Han & Leia (Hoth escape outfits), Chewie, 3P0, and a Snowtrooper with cannon.
There's also http://www.brickset.com /, which is a good reference in general (click on Theme Browser, Star Wars, then 2004), but still doesn't have pics for several sets I've seen, like the new Snowspeeder, Cantina, and new mini sets.
http://www.fbtb.net/ has pics of all these somewhere, but there's no link to them from the front page right now that I can see. You could try scanning the discussion forums there to find the links.
Kevin

The picture at brickset.com looks pretty good. I will probably buy this set when it comes out. Have to see it all the way around though. Thanks for all the great links Kevin, i really appreciate it...
solar

I think that the new design of the Falcon is the answer... It's announced for 2004. I just see a little picture at the back of the 'City of the clouds' set.
Regards,
Vincent BENNER FRANCE

If it was hype, I don't think it would have lasted a year and a half (or more) now.
This set contains the ANH Princess Leia figure. It is the only way to get it. (Alone it often sells for $30+.)
If TLC releases a new version of that character, the price will soften, esp. after the new Falcon hits next year.

I think that's just it: certain sets have a central appeal that just doesn't fade.
The other thing to consider is the "Star Wars collector factor." A lot of collectors overlooked Lego at first. This is a common phenomenon, where an established collector base overlooks a new product line initially.
Then, after the new line has been on the market for a few years and has established itself with A. its own personality (distinct from, say, the action figure line), B. a solid reputation for quality (the Star Wars model designs are some of the best System-scale sets from over the last four years), and C. enough history to have a good variety of characters and vehicles to make the entirety more appealing (as opposed to, say, the original trilogy sets never having gone beyond their original 5-pc 1999 release), then collector interest perks up.
As a whole, collectors will always seek out key characters and key vehicles; having a signature vehicle combined with a signature character, in a set which did not see the same wide release as many if not most of the other sets -- combine those, and you have a solid market performer on your hands.
Putting it another way -- every Star Wars toy collector that has SW Lego in their collection wants to have the Falcon as part of that collection. Nearly every one of them! They are much less concerned, as a group, about whether they have yet acquired the MTT, Mos Espa race, Watto's Junkyard, etc.
If the AT-AT exits from mass retail after this next year, expect a similar thing to happen there a few years from now. It's a gorgeous set -- very collector-friendly!
Kevin

Maybe you haven't noticed it, but the product number is 7190. 7190 is the postal code for Billund, Denmark!
Spooky... or just a coincidence?!?
Lars