When I first heard about the crash I thought the plane was a refurbished WW II standard P-51 and that it was being flown in a War bird exhibition. I felt bad for the pilot, and for the people who died in the crowd and for the loss of an historic aircraft.     Today (Sunday 09-18-11) I read an article in the paper about what happened. It seems that the P-51 had been highly modified for greater speed in an air race. One of the mod's was to remove 5 feet off of each wing tip and to modify the edge of the remaining wing. Couple this with the age of the pilot and the speed and g-forces involved and the chances of a crash increase greatly.     To me it seems to have been bad judgment to make these mod's to an aircraft of this vintage and history, and extremely bad judgment on the part of the pilot to fly in the race.     I Still feel bad for the deaths and injuries to all those involved, but also feel that it should have been avoided.


When I read about those crashes and deaths, I always wonder, why can't they organize the races or shows so that the planes fly not too close to the crowds?

It's human nature to want to be as close to the action as possible. Have you ever been in the front row at the starting line of a drag race when either top fuelers or funny cars were running? Remember _feeling_ the sound (beneath your muffs and ear plugs) and breathing the nitro exhaust?
I remember wading up to my waist in Mission Bay on an outside corner where the thunderboats were racing. We got splashed by Miss Budweiser who flew by us at 100mph not 50 feet away. Hayseuss Crisco, I wouldn't do that foolish thing again (now that I'm sober) but it was a very memorable experience.
The bottom line is the bottom line. If people aren't thrilled and can't experience some of the risk, vendors sell fewer tickets. Fewer tickets means lower prize awards. Lower prize money attracts fewer top acts and the bottom falls out of the sport.
-- Shake off all the fears of servile prejudices, under which weak minds are servilely crouched. Fix reason firmly in her seat, and call on her tribunal for every fact, every opinion. Question with boldness even the existence of a God; because, if there be one, he must more approve of the homage of reason than that of blindfolded fear. -- Thomas Jefferson

You can fly as high as you want. But it's harder at higher altitude.
The pylons define the turn points and it's not like you pull up to the pylon and turn left.
The course is almost 8 1/2 miles long. At 500 mph that takes just under 1 minute. I'm not sure what the turning radius would be at 4 Gs but it would be a rather large arc! Pretty close to an oblong circle?
In order to even see the pylons you have to be down close to the ground.
Here is a map of the race course. 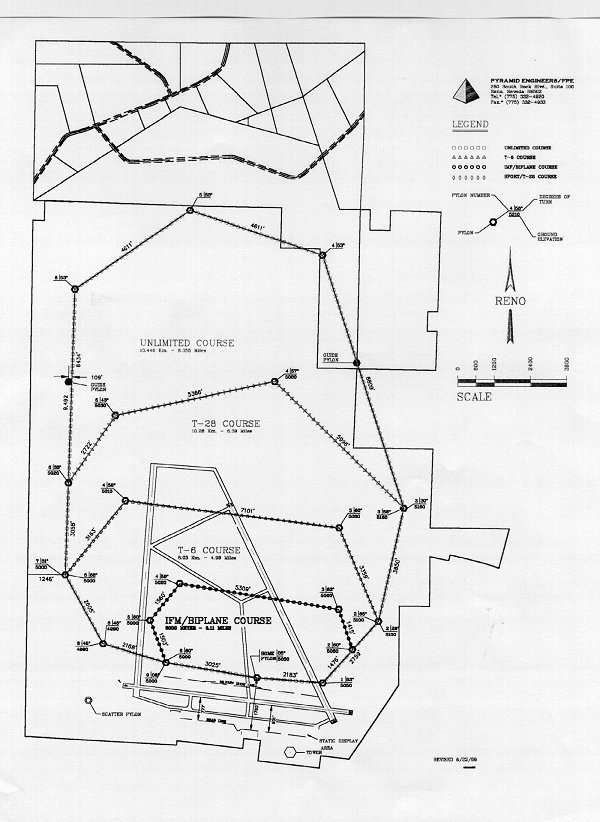 If the planes didn't fly close, nobody would attend.


I see car races all over the world with spectators sitting on the edge of death. And sometimes it comes.
Steve

Planes in that category are like "King Arthur's Original Battle Axe" - the handle has been replaced three times and the head twice.
Can you really say that age contributed to the accident? At what age must people not be allowed to do things?


If what is assumed to have happened actually happened, 80 or 18 would not make a significant difference - and as for the plane - calling it a 194X P51 is stretching it - as large parts of the plane will have been replaced, modified, and rebuilt several times over during it's racing carreer. It's a bit like a funny car. It might LOOK like a 1982 Camaro - - - - - - - -. Or even a Nascar stocker. It might LOOK like a Toyota Camry ___ _ _ _ _.
In the case of the plane it's a LITTLE different - because at one point it actually WAS a P51 Mustang.


I think it's going to get real interesting legally. Obviously the pilot was a man of means, and that spells lawsuit.
It tickles my curiosity about who has the responsibility to make the final determination regarding the aircraft modifications. I'm sure it is the FAA. But since this is such a rare bird, the "laws" and "regulations" about such changes will be, I think, ........ vague. This one had some changes that were noteworthy enough to become part of the "news" about the crash and facts that were reported. Did I just infer facts and newspeople in the same sentence? Sorry.
Isn't Nancy Grace going to have fun with this one?
Steve

As a general rule the FAA tells you what static tests and what flight tests you have to perform and allows you to perform flight tests in a specified area, going to and from the area from a specified airport by a specified route that doesn't take you over any more population than can be avoided. After you've done that, if nothing went wrong you get more privilege.
In any case this appears to have been a control failure, which might very well be unrelated to the modifications.

I've been thinking about that too. As I understand the FAA regs, an experimental aircraft, after major mods, has to undergo 40 hours of flight testing over an FAA-approved, unpopulated area to shake loose stuff like this. I think there will be some interesting questions raised.


Today, Monday, 1PM MST, I saw a new video of the crash from another angle and much closer to the impact point. At the end of the broadcast, the "news" announcer said the FAA would (paraphrasing, IIRC, and all that) likely make changes regarding crowd placement at future races. From the angle the video was taken, I would have considered where the plane impacted to be a VERY dangerous position too close to the action, and would have never sat there. I go to, and have gone to, hundreds of various sporting events. I prefer to be back enough to have a better overall view, and for a safety factor. IMHO, those people were much much too close. But there are purely stupid people in the world who want to get next to the race track, or close to a police gunfight or whatever. You can't fix stupid and they will continue to do it.
Steve

-0700 typed in rec.crafts.metalworking the following:

Granted, all I have is the brief video clips, but it appears that the pilot was trying to miss the grandstands.
In order to have completely safe viewing, nobody would be allowed within miles of the track (be it cars or airplanes), and the race shown on HD large TV screens.     Same goes for baseball games -those batted balls are hard and traveling fast. People get hurt all the time.
And don't sit so close to the screen, you will ruin your eyes.
tschus pyotr
Who 'se first response after there was a fatal accident at work was "Well, you knew the job was dangerous when you took it."

You do not understand the FAA regs. You are quoting from a portion of Experimental Amateur-Built for when a non-type-certificated engine, propeller, or engine/propeller combination is installed. After the initial flight testing, a testing period for later modifications may be assigned a much shorter period of time, in the Amateur-Built class. The flight test area is determined by the operator and the overseeing FAA FSDO.
These modified planes for racing are operated under Experimental-Air Racing, Group III. All flight and maintenance operations, including, various flight testing regimes and areas, are defined and restricted by the individual airplane's program letter which is tailored specifically for the individual airplane by the operators and the overseeing FAA Flight Safety District Offices. Any modification to the program must have prior notification to the governing FSDO by fax, with concurrence of the FSDO and any new FSDO involved.
In other words, the rules for Experimental-Air Racing are tailored to each individual airplane's situation with direct FAA oversight and lots of internal FAA policy making.

Fair enough. Then tell me this, would major airframe changes such as reducing the length of the fuse and ailerons typically require testing over an uninhabited area before flight near the public?

Yes, to flight testing after major airframe changes, the amount of time or location, we will not know until we are privy to all the details in the program letter. No, to flight testing over an uninhabited area. Numerous references in Experimental-Exhibition/Racing, including multiple flight test phases, the text:

"Densely populated" and "Congested" are constantly reoccurring words in multiple sections and sub-paragraphs. Another defining phrase in the General Experimental Flight Test section when defining flight corridors to and from the airport and the flight test area:

It also states, if, those conditions cannot be met the aircraft must be moved to the flight test area by other means than flight the densely populated areas. [ie. by truck,(my interpretation)]
After flight testing, the governing FSDO office could also disallow any requests for flights or flight areas the FSDO is not comfortable with when requests for program letter changes are made.
The section on Experimental-Exhibition/Racing certification was re-written effective about 18 months ago to tighten up the rules and I suspect we will see another re-write in the very near future.

While it is true that many parts likely have been replaced from the original plane the airframe is still that of a production P-51. I suspect that had the original designers of the plane had been around they would have been horrified at his modifications.
As to his age, just bear in mind that 74 is not 24. Reflexes do deteriate with age. If this had anything to do with this tradegy cannot be known as a certainty but it could have been a factor


You are only as old as you feel, this is why I only recognize a birthday every other year, thus I am a year younger than junior son who had a heart event ten days before he turned 35. I have osteoporosis treated with Actonel once a month and 1500mg calcium daily, B12 deficiency getting 600mg daily, high cholesterol treated with 20 mg Lipitor daily, and ED treated as required by SWMBO. Gerry :-)} London, Canada