I finally got around to rebuilding the upper hydraulic assembly on my Clausing 5914 variable-speed lathe. This assembly is attached to the speed control knob at the top of the lathe. (The lower assembly is what controls the VS pulley on the motor.)
The rebuild consisted of taking the hydraulics completely apart, completing the deburring, carefully cleaning everything, and replacing two O-rings and one V-packing. I bought the rings and packing from Clausing for small dollars.
The insides were in perfect condition, although there was some grit in the oil.
The piston is machined from aluminum (6061?) and coated with a slippery but somewhat hard black coating. (It does not look or feel like the green coating on the VS pulley hub.) This coating is why the piston has not galled and seized to the aluminum body of the assembly.
The whole project took a few hours, because I was being careful, having never done this repair before.
Bleeding air from the system is still a nuisance, and I now know more of why. The oil reservoir is too small, so when the piston pulls back uncovering the feed ports, the flow is large and abrupt enough for it to suck more air into the system. One dodge is to go half the speed range at first, until most of the air has been expelled.
Another dodge that I may try is to cobble a temporary extension reservoir that plugs into the Gits oiler at the top of the assembly, sealed with an O-ring.
Anyway, the lathe can now go as slow as 400 rpm (on the scale), versus 600 or 700 rpm before. I bet that when I get *all* the air out, it will go all the way to 250 rpm.
Joe Gwinn


The 59xx series is a bit different than the 69xx series. 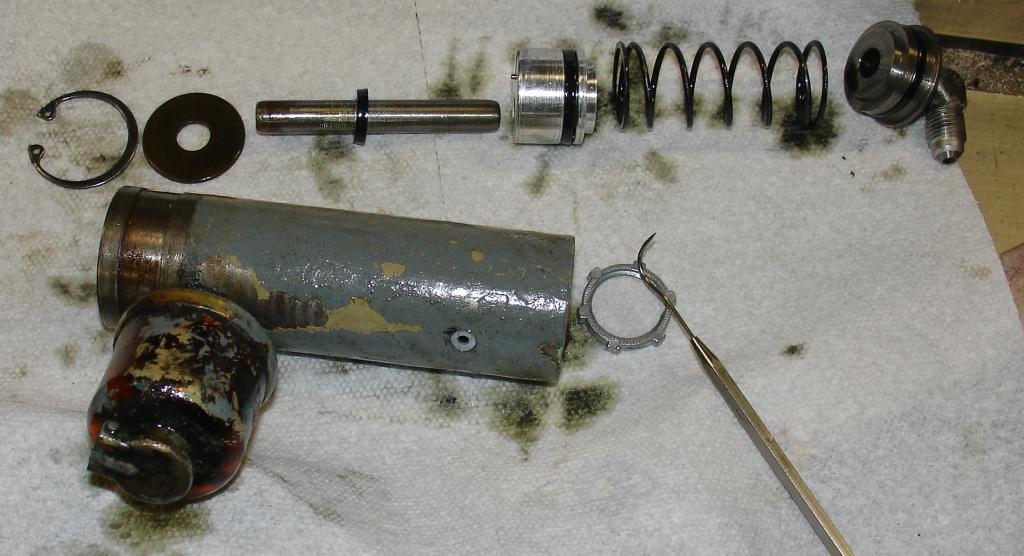 http://wess.freeshell.org/clausing/mastercylinder.jpg
Ditto's on the small resevoir when bleeding.
Sure is nice having varispeed!
Wes


Piston diameter, hydraulic fitting, and spring look the same, but the mechanics are far different.

Yep. I wonder how Clausing bled these. For sure they didn't sit their repeating ten times to get a full bleed. I bet they in effect flushed the system, as is done for automotive brake systems.

One could. It would require pulling the Gits oiler and tapping the hole (~0.516" diameter) with a pipe tap, which tap would have to be pretty short to not bottom out too soon.
But the bigger problem is that the added reservoir sticks up at least 3", and will get in the way of using the speed control handle.
Joe Gwinn

Or you could do what I did to my 5909 - I got a McMaster reservoir that was large in diameter & then shortened the reservoir's height. I now have plenty of capacity & no interference while rotating speed control handle. Haven't had a bleed/air issue since - been 8 years now.


This sounds like a good idea. I'll think about it. Thanks,
Joe Gwinn