I finally got round to doing a bit of work on the trigger of my XD .40. I disassembled it, lightly honed the sear and the ramp on the striker, polished them to a mirror finish with emery on a little muslin wheel in the Dremel. Cleaned them, lightly lubed with Tri-Flow, reassembled the piece after I found the little sear spring that had mysteriously teleported itself halfway across the shop to be found by the bandsaw. Loaded an empty mag, cocked it, rapped the backstrap smartly against the wooden bench to see if the striker would drop. (Not good!) It didn't. (Good!)
I think it's significantly smoother now. Force and travel seem unchanged (good) but it now seems free of "microlurches". We'll see if it (and I) shoot any better, but I'm seeing much better consistency while dryfiring with a laser. The red dot stayed right on the X at 21 feet at and after the click 20 consecutive times.
A recent target had 12 holes I was happy with, 8 that were 2 or 3 inches low and to the right. In retrospect, I recalled getting impatient squeezing with nothing happening so I lost focus and pulled the damned trigger. Low and right, fancy that! Now it seems to pull the same every time, and it clicks about when I think it should every time.
Thanks to Tom Gardner for the encouragement!


It's apparent what the engineers had in mind and they did a great job to come up with a system that works but was not meant as a target trigger. Isn't the rest of the engineering just amazing? CNC sure opens some doors! Imagine how complicated Luger COULD have gotten!

You should have had him grind it with his Arter. ;-)
Harold

My bandsaw never finds anything for me, the lazy Chinese bastid.

Good show, Don. It's always interesting to hear another shooters view[pint. I'm still trying to get a 1/4" group at 50 yds.from my Kimber .22 rimfire. Other day on the range I got a couple of 3/8" groups, but so far the 1/4 incher eludes me. As with most all .22s the Kimber is very ammo finnicky. I have about a dozen boxes of match ammo of different brands a friend gaved me and they all act like, welll, errrr, different brands to say the most for them. I think they are about 10 years old. The first 5 shot group from one of the Federal boxes went way right and low, so that box was discarded. Hopefully, each box of the old ammo won't perform as badly as the Federal. Maybe I need a more powerful scope and a trigger job. I've heard it takes about $300 to overhaul the standard hunting trigger pull on the Kimber to lighten it enough for serious target work. Maybe a target scope of some 16 power would help. It has a Leupold 3 - 9 vari-power scope on it now. Actually that scope is kind of wasted on a .22. It is Leupold's special close focusing design made to withstand the short throw recoil of air rifles. Hmmmnnnn, maybe put that puppy on a quality air rifle and shoot in the back yard -- yeah, that's it. Shoot all day at 30 feet, get lots of practice and avoid those pesky rangfe fees. Santa, are you listening?
Bob Swinney

Santa tells me you've been BAD.

A good air rifle is accurate at ranges a lot longer than 30 feet. I've dropped rabbits at 150 feet with an RWS Diana model 34.

Squeeze, don't pull. There's a great shot analysis chart that shows what you're doing wrong, if you can't find it let me know and I will.

Yuppers.
I tuned the trigger in my 1927A1 which improved it a great deal. Little bit of work with a stone does wonders.

Yup, thanks Tom! Only on mine it was Stan, but you get the point. Worst case, you go to gunparts and buy another one to start from. Um, not that I know that from direct personal experience (much) or anything that is.
Dave Hinz

I always check the price of new parts before I attack the old ones!


Try this site for the correction target. 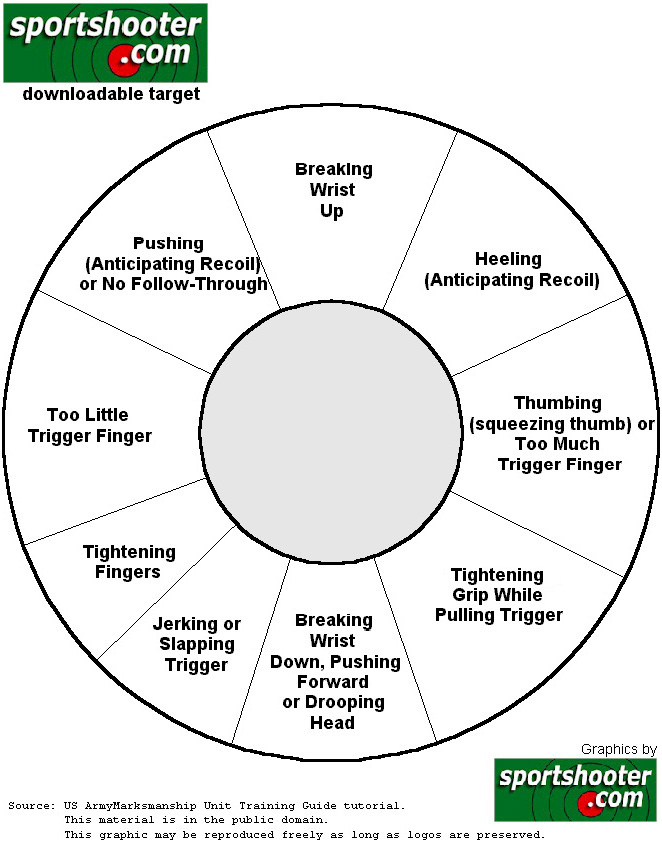 or this one: http://users.rcn.com/gwhite/#diagnostic
Doug White

It worked!
Thanks for the "what yer doin' wrong" targets, I did print both out and will study them. My primary problem now seems to be lapses of concentration and focus because I do get it right most of the time. As Tom notes, the XD is not a target pistol nor is it intended to be. I'm not having any problem with an inexpensive .22 target pistol (Browning Buckmark) I got as a "training aid". But dryfiring a .40 is not the same as live fire, and the XD does not have a "target trigger". There are more things to get wrong with live fire if there is any recoil involved, and there is a bit of that with .40 S&W. Not a lot, not at all unpleasant, but it's different than a .22.
I was fairly pleased with my results today at the range. The trigger job definitely helped. Today I had only two oopsies and a dammit, and even they would be well within COM on a silhouette. I think I know what I must do to keep improving. Just get it right every time. (Merely that!) I can't blame either of today's oopsies or the dammit on the pistol, I'll own 'em all.

One of my worries with my shooting is that I'll get used to the way a certain gun acts and eventually learn to kludge shoot it. Kind of like an old car that only the owner can drive. When in fact, the gun can be improved rather than the shooter. But just where that line is...I don't know. All mechanisms can be improved but there's that law of diminishing returns. If I were to design and build a pistol, there would be electronics replacing some of the mechanics. Problem is, everything I design ends up looking like a brush machine...I don't get it.

OK for a target pistol perhaps, maybe not for one intended for SD/HD sayeth the old EE. Bad juju if the battery is dead or it's "rebooting" when you need it to do something right now.

I don't want to carry, I hope I don't get my attitude changed. But I have to have easy access to a reliable HD weapon. In the target arena, my weak point is ME! It's a shame to think I'll never get very good and I just watch my small skill diminish with age. Years of bad habits and lack of discipline won't be negated with slick engineering but a pistol has to be at IT'S best.

I agree. I don't want to carry either and don't expect to.
Job 1 here was also to have reliable HD at hand, though I don't expect to ever need that either. The XD is the right tool for me for that job. Other models are excellent too, the XD just happens to fit my hand. A senior friend of mine loves his Glock 17. We're both right. Thing is, I don't want a "target trigger" in an HD piece of caliber I regard as sufficient for that job. We practice and train with targets and enjoy shooting at them, but targets aren't a threat. An HD sit is an adrenaline sit. We don't need to shoot a tango's buttons off but we do want to stop/drop if we must. Along with that, we senior civilians strongly don't want to fire until we fully intend to if we must stop/drop. Hence a smooth but firm trigger that requires definite intent. It's not the ideal target trigger, but it is the best and most accurate trigger in a pucker sit for anyone but a professional who drills under stress hard and often.
I mean this as encouragement. You need not be a target champion to have effective HD skill. Your XD9 is a good tool for the job, I'll bet you're a better shot with it than I am with my XD 40, and I'd now assert that I think I'm quite ready for HD if necessary. HD is not a target arena. You need only hit COM more often than not. We don't have to be very good, just need to maintain good enough. It's certainly fun to strive for better but that's sport. Fun is good. We'll keep shooting as long as it's fun. We must keep shooting now and then to maintain a modicum of proficiency, but we need not win any trophies nor even keep score. Just keep shooting now and then.
I have great respect for the M1911A1 and those that can shoot it well both at targets and under stress. It has never fit me, still doesn't. Since deciding last March to begin the several-month process of becoming equipped with kit and skill for HD, I also realized that the same reasoning applies to carry: I don't want to and feel no need to, but it'd be far too late to decide otherwise when the need presents. I took the MN course for CCW a week after I bought my XD for HD, simply because it was the most applicable training I could find for a civilian and I recognized a need for training. Rules of engagement are very different for civilians than they were in the military, and I needed to understand the terrain. All responsible owners of handguns must understand their legal terrain and rules of engagement.
Well hell, since I passed the course I went ahead and got the permit for convenience if nothing else. No hassle about transport with a permit.
I then began to casually shop now and then for a suitable carry piece, casually because I had and have no intent of carrying. Different criteria there: I wanted smaller size and weight, didn't think I'd need as much power as for HD because I can't and won't retreat from my home but I can (and sure will if possible) retreat from trouble while out and about. I'm neither a soldier nor a cop. I may only defend myself, and my best defense is appropriate alertness and avoiding trouble. I've avoided trouble for decades now with no dustups to speak of or on record.
I looked at and tried several smaller pieces and rejected them. The model that became the clear right choice for us was the little Walther PPK in .380 aka 9mm Kurz. .380 would be a bit light for those who anticipate gunfights, but it is generally recognized by experts as being sufficient for civilian SD with suitable ammo. Surprise, it is a SA/DA semiauto -- but in .380 the light trigger is not a problem at all even for me and it can be carried as DA for first round. It's easy to carry and a delight to shoot. I know a fellow senior who now carries a PPK routinely and forgets he has it on him. Ammo is pricy so I don't shoot it much, but I can't resist shooting it a little. Now that we've had it awhile, I've no doubt at all about its sufficiency for SD for us. Stopping power certainly does vary with caliber, but good hits are at least as important as the round and the PPK .380 is an amazingly easy little pistol to shoot acceptably well at 21 feet or less. Beyond that, it is a piece of work that any machinist could respect and enjoy. The design is classic, and S&W is doing a nice job of making them now under license of Carl Walther. I thought it was mine until Mary saw it and handled it for 15 seconds. I now get to use her PPK as a favor. It really is a little sweetheart.