What is Project-Aiko?
Here at Project Aiko, we are trying to design an artificial intelligence neural network system which uses both dynamic software and hardware linked together to mimic some human behaviour. By using our custom designed artificial intelligence software named the Bio Robot Artificial Intelligence Neural System (a.k.a. B.R.A.I.N.S.) together with our custom designed shell which is a facsimile of the human female body, we have created what we believe to be a uniquely designed android (a.k.a. Aiko).
Aiko's head and body were made from silicone, which gives the body a more natural look and feel of a human figure. Aiko has the ability to have a conversation with you (13,000+ sentences), including the ability to learn new things. Aiko can read books, newspapers, including the ability to solve math problems. In additional, she can recognize colour, faces and simple objects.
In the future, we hope to be able to implement advanced functionality such as being able to distinguish between two different drinks and then being able to bring it to you. Other functionality would be an ability to massage your shoulders and neck, having Aiko tell you to bring an umbrella when it rains or wear warmer clothes when it is cold outside. That and much more is planned.
Our approach to this project is to have things be modular which gives us the ability to add more functionality and sub-systems in the future as permitted by our resources, such as a taste bud and breathing system.
www.ProjectAiko.com
Sincerely, Le
Demo Video at
http://www.youtube.com/watch?v=iCR2PFrLkwA

If this project is successful, every rational guy is going to prefer one of these over a real human female. This could mean the extinction of our species.


If you want the lastest pictures and informations. Here is an update July 22, 07 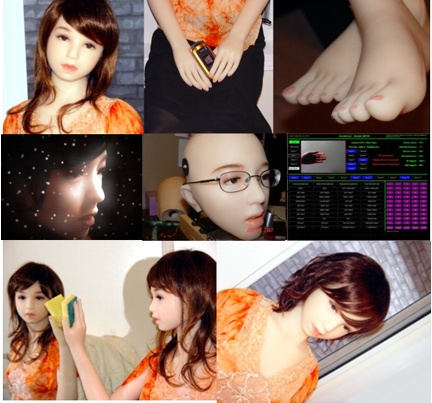 --You folks need to partner with the gang over at realdoll.com

It's going to be decades before these guys are even going to be close to partner with realdoll.com.
This is on the same level as that mannequin over at androidworld.com that has been promised for over 10 years.
They have no powered armatures, no articulated hands, nothing.
Just a dummy's head with a servo moving the mouth up and down.
Oh, but they do have software that has been available for years. (I've seen it before on web interfaces that talk with you.)
I'm going back to sleep now...