Sort of like the chimp in the trunk on Speed Racer.
Pat

: : Sort of like the chimp in the trunk on Speed Racer. :     Which on, Chim-chim or Spraddle? Not that it matters much, both were obnoxious and better off never drawn.
Bruce


Click to see the full signature.
: : The monkey is in the new movie. : It's back in the Mach 5's trunk, as usual. :     Yeah, I saw both Spraddle and Chim-chim in a commercial for Speed Racer today.
That is okay, I was not planning on seeing this movie. It is simply missing something.
And what is with Spike TV trying to give away a Mach 5 "inspired" Corvette? Lame. Waste of a good late '60's Vette.
Bruce


Click to see the full signature.
On May 4, 11:23 pm, snipped-for-privacy@realtime.net (Bruce Burden) wrote:


I was going to try to build one of those starting with an A-7. Never quite got around to it....

I saw the simulator used at a theme park. There were four seats in the simulator. I'm watching the series now, and I see that in some shots there's only one seat centered, but when they need to carry extra persons, there are at least three seats: two in front and on in the back. I've never seen studio drawings of them, so I have no idea what anyone was thinking when they set up the shots as they did.

I'm watching it, too, as much as I can stand, mostly fast-forwarding to the fx shots. Sometimes the model has a double-wide canopy on it; haven't checked if they match the correct fighter exterior to the correct interior, much less whether Buck took the correct ship when he later had to pick up passengers.
I'm lovin' the "Cruise Ship to the Stars" - the ship they repainted and maybe halved the scale of to make the Searcher for Season 2.

Oh, dear God, Flying Motorcycles. :-) I'm really surprised that some of the "old boys" here didn't come up with the Doctor Who kits that have been done over the years; particularly in regards to Daleks (numerous in both injected-molded and resin). As far as to Wallace and Grommet: http://www.internetmodeler.com/2000/january/first-looks/airfix_wallace.htm (Favorite visual scene still is Grommet grabbing the drill and whirling around atop it; best look in Grommet's eyes is when he hears what Wallace said about "The Moon is _made_ of cheese, Grommet", and realizes the profound implications of that statement to his near future in regards to potential space travel). :-D
Pat


Until recently, I thought "Dr Who" had something to do with Dr Suess's "Cat in the Hat". Don't ask me why. Might have been all the Whos down in Whoville.
Internet fans squared me away a few years back.
WmB

Oh, dear God, Flying Motorcycles. :-) I'm really surprised that some of the "old boys" here didn't come up with the Doctor Who kits that have been done over the years; particularly in regards to Daleks (numerous in both injected-molded and resin). As far as to Wallace and Gromit: http://www.internetmodeler.com/2000/january/first-looks/airfix_wallace.htm Favorite visual scene still is Gromit grabbing the drill and whirling around atop it; best look in Gromit's eyes is when he hears what Wallace said about "The Moon is _made of cheese_, Gromit", and realizes the profound implications of that statement to his near future regarding potential space travel. Actually, Wallace's refrigerator piled high with cheddar cheese, and his cupboards full of crackers, is a concept near and dear to me - as these are the perfect foods to sustain health over weeks or months - the perfect conjunction of snack food meeting three square meals per day, especially as one can eat all three daily meals in bed easily while reading, like any civilized being desires. Other...lesser...beings attempt to scale the slopes of Mt. Everest, or delve the depths of disease-filled jungles... I salute them... while reading of their adventures, and studying the peculiar mental aberrations that drove them in their desire to do such things. And as they faced frostbite and malaria in the unkempt areas of the world, I shall face the near-certain danger and discomfort of having to sleep on razor-sharp cracker crumbs every night of my adult life. This is the true "White Man's Burden" that Kipling spoke of. ;-)
Pat

Indeed. I'm rather partial to cheese myself.

Was I wrong in throwing away the jelly mould covering the Easter egg from the W&G egg painting boxed kit that had been sitting in my attic all these years? It was orange and vac-formed in the shape of that rocket - but how much stuff can you keep?

You should have seen the thing they had down at the Hugo's #9 grocery store here in Jamestown today... the "Mammoth Cheese". A huge wheel of cheese of around 18" diameter by 12" deep (I would guess the whole chunk weighed around 30-40 pounds) they were selling chunks of it by weight. Although it was supposed to be some sort of mild Cheddar, it tasted a lot more like Colby from the sample I had.
Pat


This past winter we had for the first time Wemsleydale! Shades of Wallace and Grommit! A semi-soft cheese with blueberries, it was delicious!

Wensleydale is actually a crumbly cheese, not semi-soft. In its natural state it doesn't come with blueberries in it. Try and get some without any sort of contamination at all ;-) It is wonderful stuff. There is an oak-smoked version and a blue version, both of which are also excellent. And if you are very, very lucky you might be able to get a Wensleydale made with ewes' milk.

Maybe they Cheddared the thing!
I'd love to have tasted the various Cheddar cheese flavours from around the UK before WWII when they 'utility' typed it.
As to the W&G idea, put in a geared down motor in the base of the rabbit catcher and you've got a little toy that you can stare at for ages.
Look for the Blackpool ride image and click 'previous'; <http://www.wallaceandgromit.com/characters/wallace.html

Is this something related to the W&G team?: 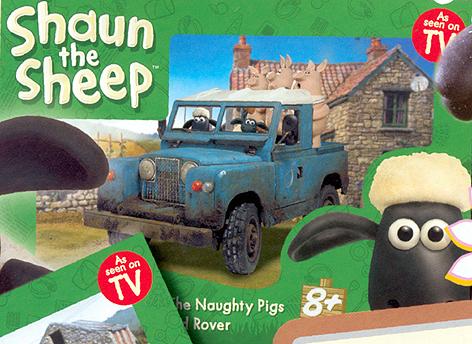