Anyone kitbashed one of these locos.
Who has some drawings ?
Charlie


OHHHH one of those!.. http://www.railroadmichigan.com/smrsgmdh.html     which yields: 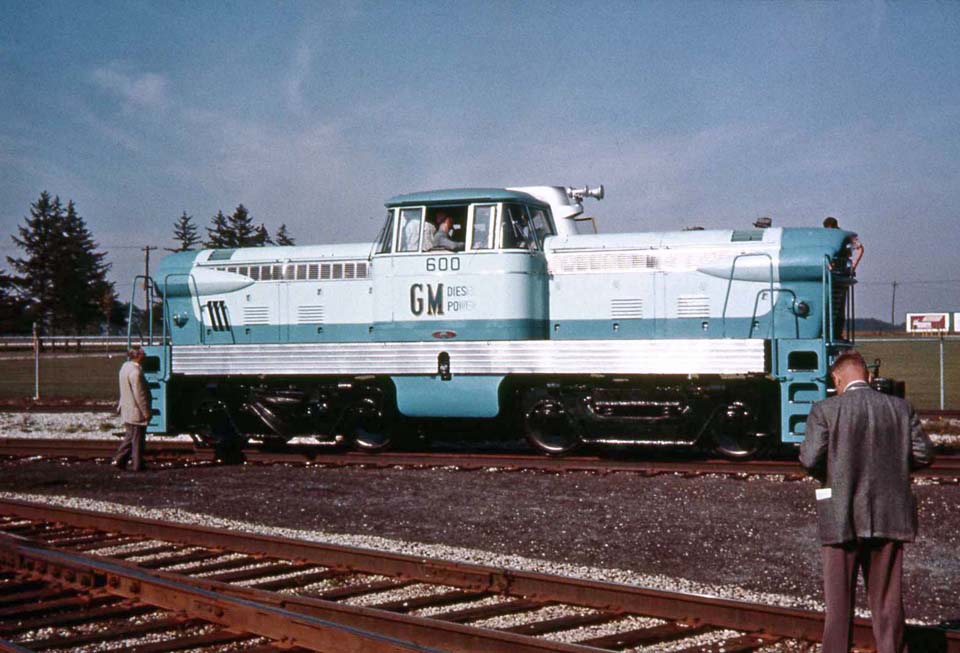 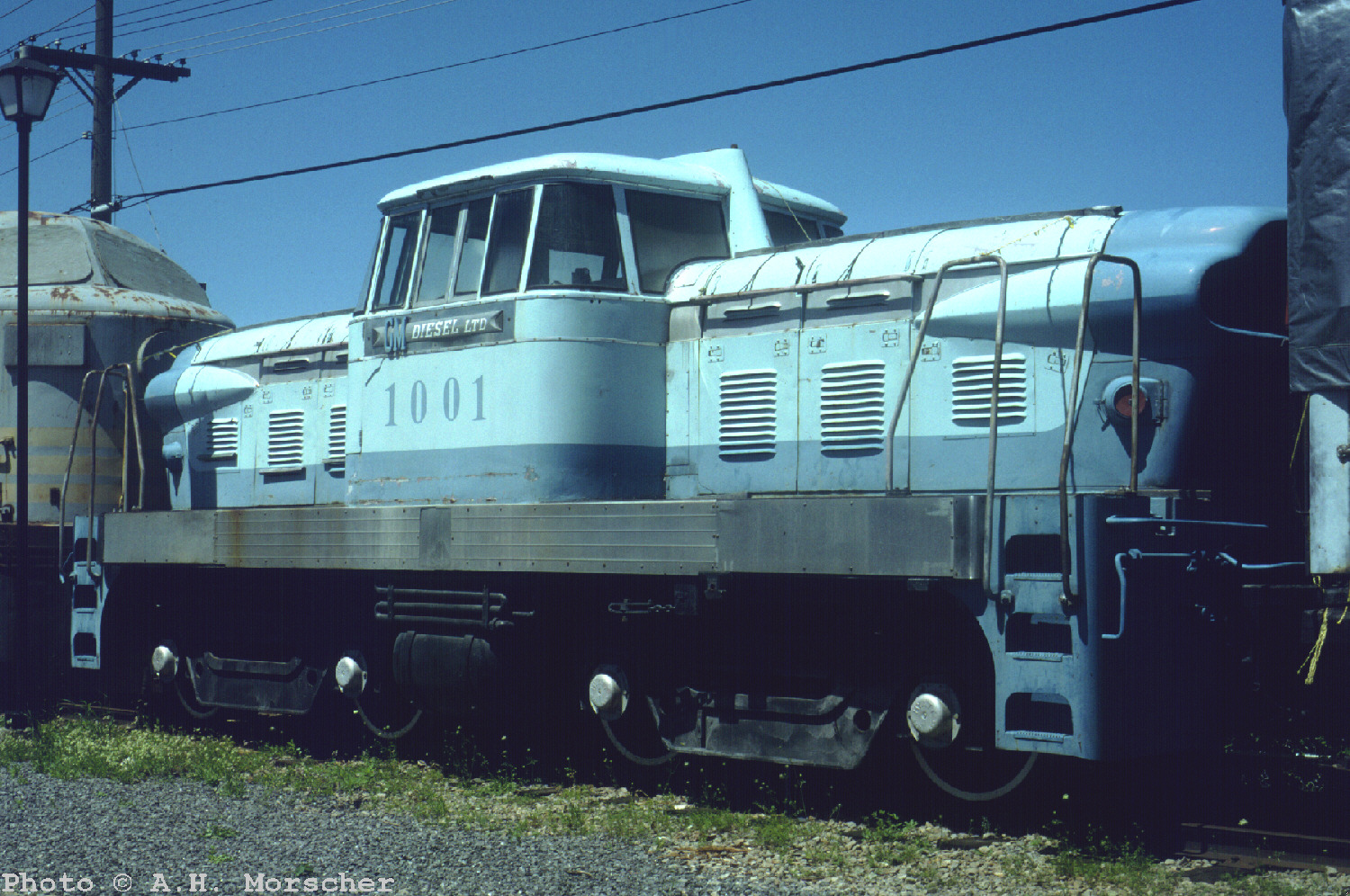 Ahhhh, now we know where the Edsel stylists were exiled to - Ford dumped them on GM!


hehehe good one!.. Although i have to admit these units are kinda catchy in the style department...

Actually, you're probably thinking more of the "Aerotrain":

http://www.museumoftransport.org/images/Aerotrain3.jpg . Now *there's* a great train that looks just like a '57 Chevy.
Denks Gott it doesn't look like *this* Aerotrain:

I always thought there was something neat about that one. Not a pretty loco, just interesting.

Looks like someone was brought up on comic books.
Dan, U.S. Air Force, retired

SC:
The horsecollar is an acquired taste, but IMHO the Edsel isn't a bad- looking car.
Neither is this locomotive, actually. Something looks French or maybe German about it. It's probably the cant-sided turret cab. If I'd never seen it before, and somebody showed me one painted in SNCF colors, it would seem almost normal.
Cordially yours: Gerard P. President, the Venango & Erie.

So I was right: it reminds me a lot of the Krauss-Maffei diesel-hydraulic locos, which I've actually seen in person (rotting carcasses sitting next to the former Sacramento Locomotive Works/present California Railroad Museum "boneyard"). Definitely Euro styling.
BTW, Gerald P: you might want to check your news agent (looks like Mozilla something-or-other) settings, as all your lines wrap in an ugly fashion. Line lengths set too long?
And what's a "horsecollar"?

Huhh? I don't think there's ever been anything like that designed in Europe - well, other than a Piccasso nude. Pure USA.

It's a collar placed on a horse so that it can more comfortably pull loads.

Sorry for putting my reply on this, but I did not see the original "Huhh?" I am not sure who I am answering, but, here goes.
The KM was designed and built in Germany and shipped to the US. It was painted in SP red and grey and D&RGW black. The story that I heard was the Germans were appalled that the RR's did not do heavy service and coddle the loco between runs, as the Germans did. The transmissions did not hold up well to the tonnage that the RR's put on them and they were decommissioned fairly quickly. One was turned into a 'camera car', but I am not sure exactly what that means. They were produced in model form by Riverossi in plastic, and I think Overland or Hallmark in Brass.
http://espee.railfan.net/spml4000.html will get you pictures of the KM in all its glory

Click to see the full signature.
Frank A. Rosenbaum wrote:

As the pictures on the referenced web-site show, the K-M locos appeared in two body styles, neither of which remotely resembled the GMD-H1. I rather liked the looks of the hood engine in SP grey/white/red livery. The high long hood, which was as tall as the cab, gave them the look of a beast hunkering down and hauling hard. Pity the machine couldn't live up to its looks.
The London, Ontario, built GMD-H1 looked like nothing else on Earth. It looks to me as if some under-employed automobile stylist was seconded to the GMD plant and told to add some "style" to the locos. His efforts were crowned with success of a sort: IMO, the GMD-H1 is one of the ugliest locomotives ever built.


To me, it looks like something Indiana Jones would commandeer for the great locomotive chase.

Well, I guess I am the odd one. I think it looks neat. If anyone produces it in HO, I will probably buy at least one. I happen to like the odd looking industrial engines. They fit my operating scheme nicely.

Click to see the full signature.
Frank A. Rosenbaum wrote:

Oh, I don't mean I don't like the GMD-H1. Just because I think it's ugly doesn't mean I don't like it. A lot of industrial engines look ugly, ungainly, awkward, misshapen, etc.
The GMD-H3 was half of a GMD-H1. Cab at one end only. 'Nother cute-ugly critter. ;-)
BTW, if you bought two, you would have the whole production run in miniature.

That's fine by me, unless they cost the same as my Ford 1000! Then I will buy only one.

I've always had a tendency to go for the more unusual locomotives. The most normal engines I have are a few consolidations and a Russian decapod.

Click to see the full signature.
"Frank A. Rosenbaum" wrote:

Hi Frank,
You misread my comment - I was refering to the design/style of the GM Diesel Hydraulic.
The German Railways Diesel Hydraulics only ran _relatively_ short distances at high power and did that very well and reliably. The German designs were copied/built under licence for British Rail and suffered from overheating gearboxes - it was a case of a design which was highly successful in one type of service not being suited to another country and a different set of circumstances. The advantage of the KM type Diesel was a high power/weight ratio, something wasted on the USA.
Greg.P.