Which aluminum rod to use?

Greetings Ernie, And everyone else too. My son has a 1985 Yamaha cycle engine that has a need for some welding. One of the heads suffers from a stripped out exhaust stud and subsequent failed repair attempts. So I need to weld on the head before I do the needed machining. Which rod or rods would be best for this type of repair? Also, the hole as it is now is about 7/16 diameter and 3/4 deep. I would like to actually get a weld puddle down into the bottom but I'm not sure it can be done by me. With my level of skill. But I'm willing to give it a try. Any advice on that front? Thanks, Eric

I used to know some guys who were heavy into VW engines. When they had to TIG Al, they always talked about "boiling" out the oil before it would get to a point of the base/new metal taking the machining of threading, etc, successfully. Someone with more experience is going to have to chime in on this one.
Steve


I occasionally helped a friend who had contracted to weld VW heads and certainly if the heads are not CLEAN you cannot successfully weld them. Whether it was the aluminum absorbing oil or oil collecting in the cracks, it could "ruin you day". He finally started having the heads steam cleaned prior to welding which helped a lot.

Forget trying to weld this hole. You are better off installing a threaded insert like a keensert. In this case you may have to make a special one. You could use an annealed set screw with the desired thread on the I.D. Anchor it with high heat red loctite. BTDT... many times... The only blocker I can think of is the amount of available material around this hole. phil k.

That is a pretty big hole. I would be afraid that enough heat to fill in t hat hole , would be enough to have a lot of the head melt. There is or at least there used to be a motorcycle scrap yard called Bent Bike , if I rec all correctly somewhere north of Seattle. Might be worth seeing if you can get another head.
Ah here it is in Lynnwood. www.bentbikemotorcycles.com/
Dan


As all here have said, the casting alloy is what we like to call "Crappite". It is a nightmare to weld and you never seem to get all of the absorbed oil out of it either. I have seen some pros successfully weld this stuff (not me however!). A mechanical solution is always going to be better. I did exactly this job on a Kawasaki KX250 head where someone had previously snapped off a tap in the already ruined M8 threaded hole. Getting the tap out resulted in an elongated, irregular oval hole. I eventually put the head up on the mill and ran an end mill in there followed by an M12 helicoil tap and helicoil insert. Then machined an M12 allen bolt down and threaded it M8 to become the new exhaust stud. I put 2 M8 nuts on the 'stud' and ran it into the new M12 thread. A real pain in the arse to do, but a good replacement head was unobtainable. regds. JB


Metric anything isn't common in the US, but auto parts stores seem to carry whatever is used in vehicles. I found M7 screws to fit my Swiss Multifix lathe tool post on a revolving rack in an auto parts store. M12 x 1.5 for my Ford was no harder to find than M12 x 1.75. I used them to replace M10 rivets on the frame, per the shop manual, the finer thread being somewhat stronger in shear. jsw

Well I left the US in 1982 and at that time I don't recall seeing any metric stuff in any local hardware stores but from many postings here it seems that metric is far more common in the US now than it was in 1982 so I get the impression the US is metricated by stealth as much is made abroad and to metric standards for a world market and you need the fasteners to repair the stuff.
M7, now the first time I ran across that was on a Citroen and the local engineering supplier asked what it was for a Citroen or something, IIRC wing bolts on a 2CV. Now a mate works in engine design and he has said that often M7 is used as the strength difference between M6 and M8 is significant and the automotive industry buys in such quantities it can get what it wants even though M7 is not a preferred size.
I remembered that I have some VW wheels bolts and they are M12 x 1.5 hence I have the tap as I used the stub axle and drum assembly as the basis of a flat lap. I can go into my local engineering supplier and buy M12 x 1.75 in all sorts of forms such as hex bolts, cap screws, button head, countersunk, etc as it is the common thread, they have a few metric fine but any M12 x 1.5 would be a special order in any form. They have some stock of UNF, UNC, BSW, and BSF but that is getting more limited as reducing demand so less likely to restock when the stock runs out.

Not a typo. I wanted a finer thread due to limited depth available. I have taps for many of these finer threads too as I work on Japanese motorcycles every day! You can obviously substitute any available fine imperial thread of ~1/2" and still cut the metric exhaust stud section to suite the original. regds. JB


Nearly always when a harder stud is threaded into a soft material, such as aluminum, coarse threads are used.
There is probably a reason why :-)


I understand that this is the correct way, but as I said up there^^^, I only had very limited depth to cut a thread in the head casting (<9mm iirc). The extra thread allowed by the finer pitch seemed a better choice at the time as the bottoming M12 taps I have have a small taper, limiting the number of threads even further. Incidentally, the repair is still ok >15yrs on ;>) cheers. JB


Re bottom taps. What I've done in a couple of cases was to tap the hole with the standard bottom tap and than grind the end off the tap until it will cit a full thread right to the end of the hole. I might have been fooling myself but it did allow an extra half a turn of threads in the hole :-)

IIRC from college, threaded joints in dissimilar materials can fail sequentially, spiralling along the thread, starting at the outer end of the female thread if it's in a weaker material.
As the bolt lengthens while being tightened the load on each portion of the thread increases toward the mouth of the hole, and the female thread will begin to shear off there when it's strength is exceeded. The bolt will pull out, reducing tension, until the female thread stops shearing.
A coarser thread has a wider, stronger root that withstands more of this locally concentrated shear force.
When the female thread is in a material with the same strength and elongation under load as the bolt this doesn't happen, both lengthen identically so the load is shared equally over the length of the threads. A turnbuckle is a good example if the sleeve has the same cross-sectional area as the eye bolts and stretches at the same rate. Then the male thread root becomes the weakest part, so a finer thread with a larger root diameter is stronger.
Drill rod thread tapers to balance and maximize the thread-strip and root-area strengths. 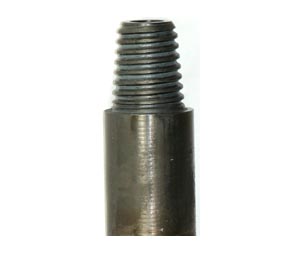 https://www.atlanticsupply.com/pictures/%7BEE9C9B2A-4A62-47B6-842D-30C27DF70B3F%7D_a52s.jpg
The USS coarse thread series was designed for steel bolts in weaker cast iron female threads, and serves well enough in cast aluminum. The finer SAE (Society of Automotive Engineers) series was introduced for automobiles where the female threads were in stronger steel components or nuts.
http://www.boltscience.com/pages/strength.htm

Pretty interesting stuff there.
Here's a tip - doesn't work for the job at hand, but it comes up often enou gh in motorcycle repair - You can fix a stripped m6x1.0 hole by substitutin g a 1/4-20 bolt for the original. Just enough larger, and just coarse enoug h to screw right in with no drilling or tapping.
Back in the day, I did hundreds of those, mostly for the valve covers of Ho nda CB450s. Each cover had 8 screws and it was a pretty rare thing to find a head without at least a few of them stripped. This was an easy, cheap fix .
I'm sure there are other similar combinations of fasteners that can be subs tituted for each other, but this is the one that I know about from actual e xperience.


How difficult was it to thread the hardened screw?
An HSS lathe bit will cut Grade 8 hex head bolts, but I haven't tried socket-head screws. jsw

The fasteners are not hardened. I've never seen or heard of a hardened Allen bolt. The one I used is the common 10.9, although an 8.8 would work ok for the low torque application. JB


If you had to weld it I would go for 4047 filelr, if you can find it. 4043 will work, but not as well.
I agree with the other posters about a mechanical insert solution being a better option.

Thanks to everyone for the helpful replies. I will try the 4043 Ernie, because before the mechanical solution will work well I need to get some metal for the thread insert to grip. The hole as it is now is so large and out of round that the wall thickness in part of the hole is only about .040. This is at the mouth of the hole so maybe it won't matter if I can get threads deep enough into the head. Cheers, Eric