How does this drill press vise mount to the table?

I came across this vise (a palmgren), and I'm trying to figure out how it attaches to the drill press table. Most press vises I have seen have lugs of some sort to bolt to the table, but I can't see any on this one. 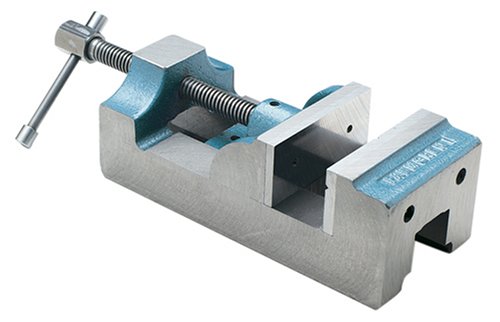 http://ecx.images-amazon.com/images/I/41R9WRX8XCL.jpg
I'm sure someone here has come across a vise like this, how is it attached to the table?
Jon

Apparently "Models 13 and 16 have side grooves for mounting brackets"
http://www.pts-tools.com/cgi/CGP2SRIM?PMITEM=JB5014&PARTPG=CGP2SRFC&PAMENU=Content-type:%20text/html

It isn't normally attached to a table although it could be clamped down or used with a magnetic table as on a surface grinder. I've got one I made as an apprentice, accurate to a tenth any direction. Nicely engine turned and sat in the top of my tool box and NEVER used :-)

It doesn't need to be attached. You can bolt stops to the table to prevent the vice from turning/spinning.


As others have mentioned (I wasn't going to be first) you hold the vise in one hand and let it float to center when you drill a punch mark or open up a pilot hole. It reduces the tendency of small work to climb when the bit breaks through, or spin and cut your hand.
It doesn't completely prevent either, though, so I drill almost everything on the mill, using a small vise like that to make tiny parts more manageable on parallels or against the vise stop.

Thanks to everyone who replied to my query, I appreciate it!
Jon


Not sure of the size from the photo. Smaller ones (e.g. about 1-1/2" jaw width) are usually held in larger vises at need.
The larger ones (say about 3" jaw width or so) often have tapped holes on the bottom of the rails, and there is something which came with it which looks sort of like an outdoor faucet handle with a shank a few inches long, and at the top is a shoulder and a washer and a projecting male thread to match the tapped hole in the vise rails. You stick the thread through one of the slots in the table, thread into the vise, and tighten by hand to lock the vise tot he table.
I know that ones from Sears (Craftsman name) were like this, though they did not have the Palmgern name -- they may still have been *made* by Palmgern.
Good Luck,         DoN.

Not when you are drilling into brass, and don't have a "dubbed" drill bit to prevent breakthroug grabbing. Having the vise spinning around frantically near the hand which was holding it is rather exciting, in an undesirable way. :-)

I have a number which do attach to the table -- making use of the ability to swivel the table support arm around the column, and (cheap Taiwanese drill press from the 1970s) loosening a clamp to allow the table to rotate around its center. Very useful in getting a potential hole location under the bit. :-)
And -- there were (and probably still are) X-Y tables sold to go between the table and the vise on a drill press. (Some think of using them for milling, but they are not rigid enough for that -- as though the drill press were. :-)
Enjoy,         DoN.