(Slightly OT, but contains a LOT of metal...)
The 115hp steam traction engine will be operating this (Labor Day) weekend at Ardenwood Park in Fremont. The engine was built in 1905 by the Daniel Best Co. of San Leandro, CA. A spectacularly impressive machine, it stands seventeen feet tall and weighs in at somewhere around 22 tons.
New, it hauled logs from the woods to the sawmill, pulling a string of wagons carrying what, today, would be about four semi loads a trip. This weekend, it will be pulling an antique wagon, giving hayrides to kids of all ages.
Take a look at: http://www.museumca.org/global/history/collections_tractor.html
The Ardenwood Railroad's steam locomotive will also be running.

I think there must be some sort of error in the HP designation. All the steam traction engines I've seen from the 1905 era are in the 10 to 20 hp range (belt hp) .
Jerry Foster wrote:

Agreed. My brother's Port Heron is about the same class and I think the HP is about 16-18


weekend
Daniel
stands
This
all
I admit that, when I first saw the engine, I thought 115 hp sounded a bit on the high side. But that was the rating it was given by the factory and one of the crew that has been involved in its care for years, an engineer by profession, did the calculations and concluded that, at a boiler pressure of around 175 - 200 psi (which it carried when it was new), 115 hp was about right.
Today, the century old boiler is licensed for 100 psi. It is still powerful enough that whatever is hooked to it has a pronounced tendency to come along with nary a "chug" from the engine to suggest it is starting to labor.
One thing that adds to the confusion is that this is a "road engine" as opposed to the agricultural version which Best also built. The ag engine is shorter for a sharper turning radius and had rear wheels that were three or four times as wide (less soil compaction). Further, the vertical boiler, hidden as it is by the 8 ft. diameter rear wheels and the 450 gallon water tank in front is much larger than it, at first glance, appears. It is about eleven feet tall, from the bottom of the grates to the base of the stack and is nearly five feet in diameter. The grate area in the firebox is close to 15 sq. ft. The engine is two cylinder, double acting and displaces appx. 2000 cu. in. per revolution of the crankshaft.
(If anyone wants more accurate measurements, I'll take a tape measure to it this weekend...)
This is not a small engine.
Jerry

<snip>
They made them that big: At Osage,Iowa, there a good Steam Meet each year with a 110HP Case and 140HP Reeves as the two big boys of the show 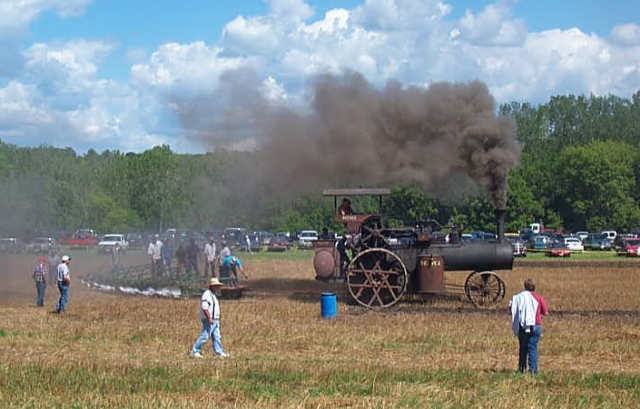 http://web.archive.org/web/20030811225703/users.ev1.net/~alternity/steam/cas eicon01.jpg
Did a little research...
Floyd Clymer's ALBUM OF HISTORICAL STEAM TRACTION ENGINES AND THRESHING EQUIPMENT NO. 1, published in 1949, has, on page 76, a reproduction of a page from the 1906-1907 Best Manufacturing Company catalog showing this model of engine and describes it as its "latest improved road engine of 110 H.P. mounted on springs front and rear."
Jerry

Best (and Holt) made some absurdly wide( to modern eyes) wheelsets for their Traction Engines for avoiding sinking into the soft peat in the San Joaquin Valley- like 15+ ft. wide on each side to keep the ground pressure reasonable. The Crawlers came sortly afterwards as a better solution. I havn't read some of those Clymers books in years, but I think he had some pictures of those, too.
** mike **

Does it have a big water tank and a little boiler? That's what it looks like, it's pretty different from the ones I've seen.
John