What is that on top of the mill's head? Drawbar or a place to mount encoder?

I climbed on the mill today and made a startling discovery.
Her's a picture taken with a cell phone. 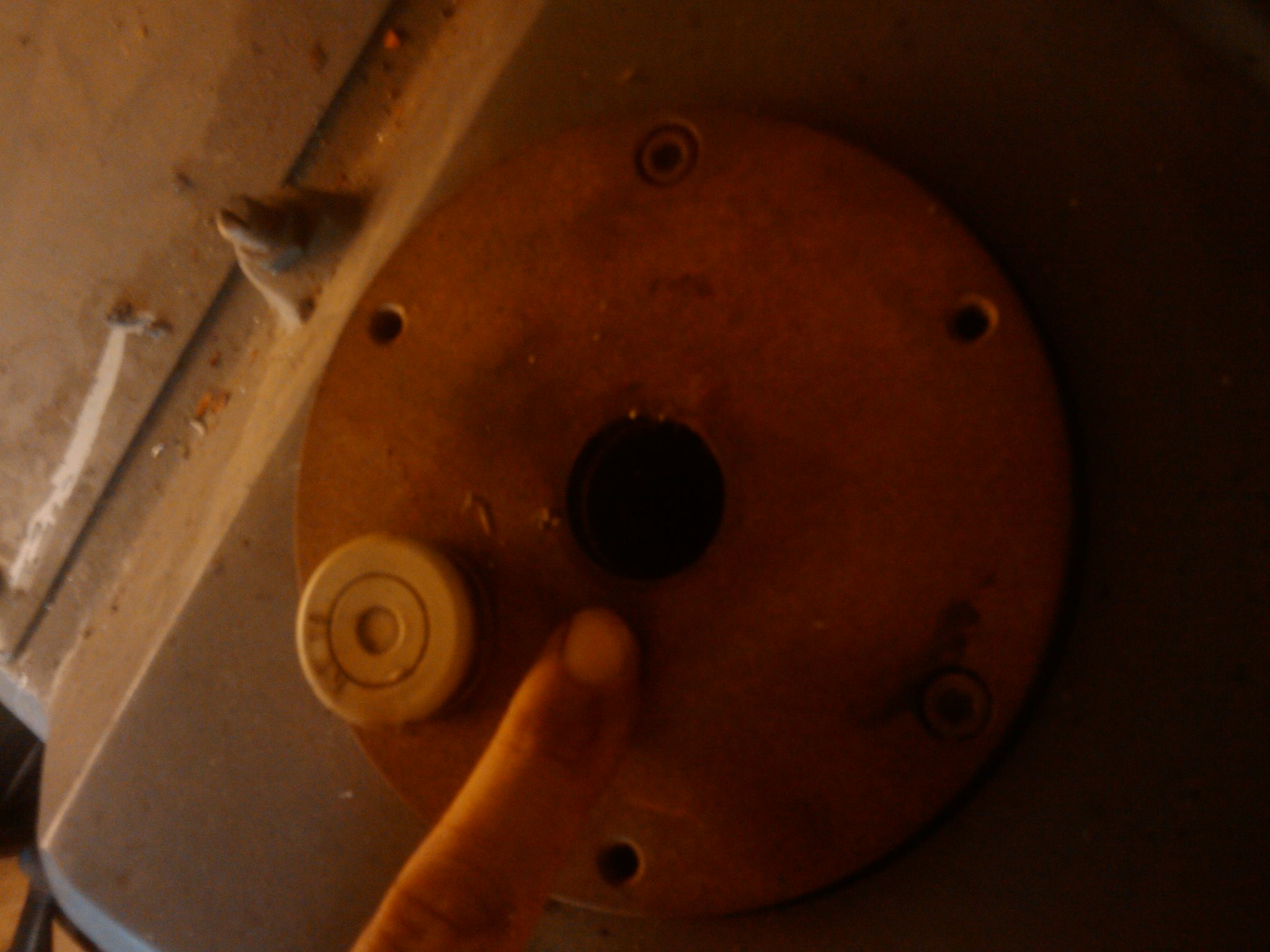 http://igor.chudov.com/tmp/Top-Of-Bridgeport-Head.jpg
What this shows is a round steel plate with six holes on an outer circle, and one hole in the middle. Three of outer holes are used to hole the plate and three are not used and threaded.
The hole in the middle is plugged with a soft rubber plug. I removed it and found out that it opens a hole to the spindle.
My guess is that this is a mounting plate for an optional power drawbar, which I do not have.
Some questions come to mind
1) are power drawbars needed for this mill? It would seem that the answer should be no.
2) Are power drawbars somewhat standardized, and do I ever have a hope of finding something compatible?
3) It would seem that it would be very straightforward to install some kind of a little encoder shaft that would go into the hollow spindle, lock itself from inside, and provide information about the exact position of the spindle to the EMC controller.
If so, could I use EMC to do rigid tapping on this mill? If I have the exact spindle angular location, instead of approximate RPM, then I could make Z axis a "slave" of this position, so that, for example, Z would move 1/20 inch with every complete revolution of the spindle, so that I could cut a 20 TPI thread.
Makes sense?
i

Do you have a drawbar? Or, is this a quick-switch spindle?

The problem is the spindle moves up and down! It could get real tricky to install an encoder in there and allow it to slide up and down without anything binding or shearing wires.

If you can get a quadrature encoder with index pulse attached to the spindle, then EMC2 definitely can do rigid tapping. I found a totally different way to adapt a spindle encoder to my Bridgeport, it involved fitting three gear-tooth sensors for auto transmissions inside the head to pick up the teeth of the bull gear. My mill is not a quick-switch, so I do need the drawbar, and that blocks the "top route" to the spindle.
Once the spindle encoder is set up, you just use the G33.1 command with appropriate parameters for depth and thread pitch. I have a Procunier "CNC" tapping head, and it works for tapping, but it is such a long contraption that the tip of the tap ends up nearly a foot down from the spindle nose, therefore the exact position of the hole is less precise, at least with combined drill-taps. Rigid tapping is a much cleaner setup.
Jon


Quickchange. Erickson QC-30.
I do not have a power drawbar.

I thought that it is the bottom part of the spindle that slides up and down. I can check easily, I suppose.

Awesome!
Yep, this is my concern exactly.
I will check if the top part of the spindle moves up and down, or not.
i

Yes, the spindle is a splined, two part thing and the hollow top of the spindle stays in place, regardless of the Z axis position (bottom part).
This means that mounting an encoder on the top is very easy, just a little machining exercise to make something that I can stick inside and make it stay connected to the spindle, with some little top piece to mount encoder wheel.

Correct. Try something that will expand into the top of the spindle. Its not a "wet" area, so your choice of materials is quite wide.
Gunner


I think that I can easily make something from brass or some such. Let me think.
it would be a fun and inexpensive improvement.
i

I'm pretty certain the underside of this part holds the top bearing for the vari-drive actually. The three threaded holes you see are for jack screws to assist in removing this place. You could use them for mounting a power drawbar if you wanted.
A power drawbar sure is nice, but not the least bit needed if you are not doing production machining with multiple tool changes. Even then, I've often found I can swap parts in the vise faster than I can change a tool...
Jon

1. Powered draw bars are normally simply a butterfly drill/butterfly type impact wrench inside a can, with a tapered "tooth" that when you push the handle one way..it twists the mount on the tooth and it brings the wrench down (has a socket mounted on the end of it) and pushed down on the hex on the draw bar and at the same time, presses the tighten or loosen lever on the power tool. Its very simple..much simpler than I can verbalize here. And the factory ones simply bolt down to the 3 empty holes you see up there (those holes are used to push the flange out of the top of the head..remove the mounting screws, stick em in the empty holes and use it to push down, lifting the cover out of the top of the head.
2. If you can put something in there that you can expand and grip the inside of the spindle tightly...it would be a very good place to put a positioning encoder. Such would have very little loading on it, so perhaps a long piece of rod with a chunk of rubber tubing on it with a washer welded to the shaft, and a nut on the upper end to tighten down on the rubber tubing, expanding it on the shaft and pressing against the inside of the spindle, locking it in place. Then a simple coupler to an encoder mounted on a "tripod" that will bolt to the 3 empty holes. Very simple to do, very easy to make and impliment.
What holds your tool holders in place currently? Some sort of quick detachable tool holder?
Gunner


OK, at least I have an idea now, thanks.

Yes, something like that should be easy and safe to do. I thought to make the plug out of brass, cut it like a collet, and expand from inside with a screw.

I've been out of town, so I'm late to the party. Youve got exactly the same top on your mill as mine. i made an expanding collar that's only 50 thou thick to hold a timing pulley. This still allows you to change drawbar tools. Something you'll likely need to do at some point. I'd suggest a complete encoder off ebay for this. get one that you can mount on slots to tighten your little belt from the spindle pulley. Allan bradley units are about the best. one example: http://cgi.ebay.com/ALLEN-BRADLEY-OPTICAL-ENCODER-845H-SJDL25CFY1-/270611416796?cmd=ViewItem&pt=LH_DefaultDomain_0&hash=item3f01b286dc
FWIW, I'd watch for a power drawbar unit on eBay. Very nice addition that you'll soon wonder how you lived without it.
karl

if that's the case, he doesn't have to get tricky about leaving room. I'd still go with this encoder route
Karl


I'm curious, if its a QC, why the hollow spindle shaft?
karl

Same base spindle part before grinding the particular taper and whatnot?


That's why I'd double check he doesn't have a QC adapter with a taper 30 or taper 40 spindle. My machine came with an adapter that had never been removed. I do know they also make QC spindles too.
Karl


My mill has a QC-30 spindle and a collar to hold toolhonders in place.
The toolholders are threaded on top and I guess could be drawbared too.
I am not sure how this QC-30 spindle is compatible with "Cat 30" or "NMTB 30" tooling. eBay and liquidations are flooded with that tooling and I wold love nothing better than to be able to use it.
i

Id love to have both NMTB 30 and 40 tooling with drill chucks attached, not simply stuck in the hole.
Gunner

What you have is a quick-change nosepiece which *expects* the NMTB-30.
The *taper* in the CAT-30 is the same (and actually happens to be the same angle as the shorter taper on an R8 collet) -- but the CAT-30 holders have a thicker flange with a groove in the edge to grip it by for the automated tool changer turret. This flange will *not* fit in your quick-change holder. And your quick-change holder *requires* the thinner flange to work.
And the CAT-30 does not have the cylindrical threaded collar which your NMTB 30 holders do which aligns the holder at the top. Instead, the CAT-30 ends at the end of the taper -- which is threaded, and into which is screwed (and Loctited) a stud with a ball end. This ball end fits into a gripper which locks as it pulls the holder up into the spindle -- the equivalent of a drawbar without having to run a thread in and out.
Also -- the two notches in the CAT-30 holder's flange are of different widths, to assure that the tool change turret always puts it in at the same orientation -- something which would be important with some rigid tapping (if the thread always had to start at the same orientation) but which probably does not matter for most other tools.
You don't have the tool changer turret (neither do I), and you can't use the CAT-30 in that spindle (perhaps you could turn the flange down to just the right thickness, and make a new cylindrical section which screws in where the pull stud was originally.
Now -- I have taken CAT-40 tool holders and replaced the stud section with a new cylindrical section to use in my Nichols horizontal spindle mill -- but that *does* use a drawbar, and does not care whether the flange is even there. The arbors for horizontal milling don't even have the flange. They just have a hole which is drilled through and a pin is fitted to engage the Allen head cap screws in the face of the spindle. (Those same screws fit into the slots in NMTB 40 or in CAT-40 holders.)
There are also step-down adaptors to accept 30-taper tooling in 40-taper -- so I use some of the holders for the Bridgeport on the Nichols when it makes sense.
I hope that this helps.
Enjoy,         DoN.