Hey.
This is in the "I wonder if anybody has done this before" catagory:
As many of you know, for a couple decades DC Comics had an ongoing war comic book series called "The Haunted Tank", which was about a WW2 tank commander who happened to be named Jeb Stuart, who had a working relationship with the ghost of the Civil War Confederate general of the same name.
Most often in the series, the tank used by Stuart was an M5 Stuart light tank, also in some stories the Stuart was replaced by a cast-hull or welded-hull Sherman. And then there's a custom tank that was introduced in or around 1971 (real-life as opposed to storyline)...
It was rebuilt from a Soviet T-34 hull, with the suspension modified to handle four larger road wheels instead of the standard five. (Which had bigger road wheels?--T-34 or Cromwell?) The drive and idler sprockets were also changed, perhaps to accommodate American or British type tracks. The roof of the forward hull was modified by removing the original turret ring and using a smaller one more amidships, thus opening up space for driver and hull gunner hatches.
The turret doesn't match any I've seen, Allied or Axis. The hardware on the roof of the turret is akin to Sherman and Pershing, and the plan view resembles the Pershing, but the shape suggests a welded unit rather than a cast one. The gun is a British 17-pounder. If I were building the model myself, I'd probably use a Sherman Firefly turret and add applique armor plating to emulate the shape.
I found plan drawings via the search engine Usenet-Replayer and doing a .jpg file search for "combat comic". If anybody is interested in building the model I'd be glad to send them the .jpg file e-mail.
Stephen "FPilot" Bierce/IPMS #35922 Pilot's Log: http://www.livejournal.com/users/frustratedpilot

I still have mine. Most are not in the best of shape, since they were read and re-read many times as a pre-teen/early teen. Ahh! GI Combat, Sgt. Rock, Unknown Soldier, War.....
Sean

And don't forget Star Spangled War Stories!
This comic book series was (usually) about GIs running into dinosaurs on remote pacific islands during WW II. It sounds kind of weird now but the stories seemed to work (at least for me).
I also liked Turok, Son of Stone. This comic was about two native americans, Turok and Andar (I think) that somehow stumble into a land populated by dinosaurs (or honkers as they called them). I never did figure out how they got into this place.
I guess I had a thing for dinos as a youngster in the mid-'60s.
Martin

here's a link to a comic book cover where a Viking comes to their aid...
Craig 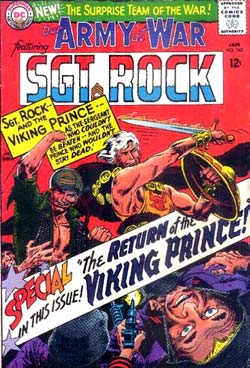 
Did you ever see "Godzilla Versus King Ghidrah"? They had a flashback sequence to WW2 in which Godzilla (pre-atom bomb) trashed a platoon of American Marines and saved a Japanese outpost.
Stephen "FPilot" Bierce/IPMS #35922 Pilot's Log: http://www.livejournal.com/users/frustratedpilot

Boy, I must have missed a lot! Last time I read any of these they were using an M3 Stuart (which was the other deus ex comic writer plot device) that was protected by the cavalier. My favorites were when they would take on a Tiger, who promptly missed them but whose resultant shell explosion flipped the tank over on its back. The hero would still be able to traverse the turret while upside down, fire the 37mm, ricochet a round through the Tiger's driver's view slit, and JUST happen to hit the ammunition, causing the previously noted purple Tiger to explode with a huge bang.
Still it was fun if you were a kid and and no clue about reality!
Cookie Sewell

It sounds very intriguing...in an alternate-universe sci-fi sort-of-way. I would love to get a copy of whatever you are offering.