I am thinking of starting a layout with 3 rail locos etc from Marklin , Trix , Hornby Dublo ,JEP and SMCF Can they all run on the same track and what would be the best transformer ? Many thanks for any guidance you may give and any books worth consulting.
regards tony

I am not an expert in these matters by any means, but would advise extreme caution with the electrics. Hornby-Dublo ran off 12 volts DC while Marklin used 16 volts AC. Prior to WW II Trix used 14 volts AC, after the war they changed to 12 volts DC and became Trix Twin. This signified that it was, possible to run two trains on the same track independently of one another; one collecting current from the centre rail and the left hand one, the second using the centre and right hand rail. Not sure about either JEP or SMCF, but without wishing to discourage you I hope this semi-cautionary advice is helpful.
David C
wrote in message
I am thinking of starting a layout with 3 rail locos etc from Marklin , Trix , Hornby Dublo ,JEP and SMCF Can they all run on the same track and what would be the best transformer ?
Many thanks for any guidance you may give and any books worth consulting.
regards tony

--
This email has been checked for viruses by AVG.
http://www.avg.com

As another poster stated Marklin is AC as was older Trix. I don't know too much how their motors were wound but Hornby Dublo with permanent magnet motors will not work on AC from a transformer without being rectified to DC and the easiest way to achieve for someone new will just be to a get a normal DC output controller and use that if they want to run Hornby Dublo and swap for an ac supply to run Marklin. If he is tempted to get an original Hornby one he should consider that due to their age a safety check of 50+ years old wiring and insulation on the mains side may be advisable.
G.Harman


One possible solution is to run with AC on the track and install a rectifier inside any loco that requires DC. Th only problem being that it is not possible to reverse without a switch on the loco.
How did the AC systems cope with that anyway, perhaps they didn't??
Jeff


A relay that was triggered by a brief full voltage surge.


OK, so the same system would need to be installed in a DC loco along with the rectifier.
Jeff


Modern Marklin does that. They're basically 3-rail AC versions of modern 2-rail Trix.

IMO, there's no reason to go 3-rail AC these days, unless you want to run a collection of historically interesting antiques.
Although, for some reason, most American O-gauge modellers use it. It's a triumph of Lionel Marketing. Even scale manufacturers make and sell 3-rail coarse scale versions which outsell the 2-rail by about three or four to one.


Well Yes, but without being too disrespectful to the OP if he is not familiar with the different systems as they built then doing modifications like that may be a bit awkward for someone fairly new to model railways.
What you state though is basically what a DCC system does and that would solve the reversing problem. Again though modifying old style locomotives both DC and AC to run on a Digital Command system is not always easy and can tax the skills of experienced modelers, and it is easy to damage a DCC chip beyond repair which can turn out expensive.
G.Harman


I don't think anyone was suggesting a DCC system.
I was proposing a very simple way of making a DC loco run on an AC system.
Adding a diode, or bridge rectifier, inside a loco should not tax anyone too much.
What may be a little more difficult is emulating the relay system that the AC locos use to go in reverse. However, a manual switch would be very simple though.
Jeff


IMO, it would be better to use Peco track and add their stud contact strip, wiring it up for both 2- and 3- rail and switching petween throttles.


However, that does not address the problem of running both AC and DC 3-rail locos.
Jeff


Yes, it does.
Just use different controllers.

Your mention of wiring for 2 rail may be the reason for your post to be queried, The OP only wants 3 rail so both controllers need to be able to be switched to supply that. OTOH a degree of keeping the two running rails isolated from each other could be useful if the OP has any Trix twin locos and wants to avail himself of the ability to control two locos independently on the same track that system offered by having one loco connected between the center rail and left running rail and the other by center rail and right running rail.
if he does that then rolling stock with all metal wheels and axles such as older Hornbt Dublo will have to be taken off the track when trix stock is running. G.harman

|Simple for you maybe

You sound like a teacher who because he had an aptitude to learn French became a teacher of French and cannot understand why not all his pupils find the task easy.

So not so simple a task then , and faffing around with a switch mounted on the loco without tipping it off the track is going to become a right PIA , now you or I may be able to overcome that by using a reed switch or two worked by a magnet on a stick, but its still a bit of a faff.
Your suggestion is yours , my suggestion is mine . Both would achieve the same end.
The OP if he was experienced in electronic work may well have not asked questions about what to you and me would be a relatively straight forward task.
As it is he asked for advice and literature, in the context of model railways it will be easier to find out how to convert locos to DCC than to learn basic electronics and then start conversions using electronic assemblies he may not be familiar with.. Besides he may well have reason for collecting these old time models and that is to keep them as original as possible. As I and others suggested up thread the easiest way would be to purchase a DC controller and an AC controller and switch between them as appropriate either by swapping the feeds or as someone has suggested using a switch .
If the OP is still reading that should be a double pole double throw switch commonly called DPDT, you would wire you track to the common contacts and each controller to the switching ones. diagram here. 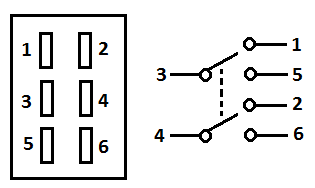 http://www.learningaboutelectronics.com/images/DPDT-toggle-switch-diagram.png
to run the old locos concerned you will need three railtrack from one of the original manufacturers such as Hornby Dublo or Marklin M track or if you intend buying new make sure it has a large code such as 100. Peco and its contact strip may do for most but some of the older stuff may need more depth than that , Wolf mentioned Marklin but not range,you would need the K track which is fractionally deeper than code 100, if it had a number it would be 108. the C track is shallower.
G.Harman