I'm looking at an early -50's South Bend for use as a hobby machine. It was advertised as a 9" Model A.
The folks at South Bend Lathe (apparently Grizzly) cheerfully informed me that many of the parts for a catalog CL670A lathe were available, but then pointed out that support for all pre 1982 lathes has been discontinued, with parts not being restocked. They also referred to it as a "10K", which I gather is more widely called a "light 10".
How much impact is this likely to have on the repairability of the lathe? It does not seem to need any immediate repair and my usage will be modest, so "wearing it out" isn't likely. But, things do break, especially when mistakes are made. Can one count on other sources with a month's delay?
If there's a known problem or deficit of parts I'd be grateful for a warning.
Thanks for reading,
bob prohaska

you really want a Heavy 10.
But..there are Atlas parts all over the US and on Ebay
Very few new ones...but there are decent enough used parts out there.
"


Indeed, I do, but can't justify the space or cost.
bob


I have a 10L that came from a trade school where the students abused it much more than a hobbyist owner would. They broke off all the small parts like the oil tubes, repeatedly crashed the chuck into the carriage and beat on the tailstock like an anvil horn. Yet they didn't harm its functioning, and I was able to find (or make) replacements for the missing and broken pieces, mostly in the back room spare parts heaps of second-hand machinery dealers.
The accuracy will degrade with wear but you can compensate once you understand it. For example mine won't drill straight and I have to run a boring bar into the hole to remove the wobble before drilling to final size. The tailstock may not be the original one.
It's still useable even without boring. Yesterday I made a drill jig on it to remove a broken screw on the truck, and the locating sleeves that establish the center of the hole from the other ones came out a few thousandths off on the inner end, good enough to keep the drill in the broken steel screw and preserve the 4mm tapped hole in the aluminum intake manifold.
The less critical machined parts on the lathe shouldn't be too difficult to copy, possibly excepting the #12 threads and the reamed taper pin holes. I made an eccentric bushing for the backgear shaft of a partly stripped spare 10L headstock by mostly copying the one on the good lathe and then hand-fitting the differences until the backgears engaged smoothly.
http://resources.southbendlathe.com/manuals/sb1002_m.pdf
jsw

The alternative..and my personal favorite..is a Logan 11" lathe.
Much much better than an Atlas lathe
Gunner
"


Agreed. The two Logans I've seen in the last couple of years both had problems. First had notchy spindle bearings and zero tooling, the second had damaged back gears and almost zero tooling. The problems were fixable, but not cheaply and the lack of tooling promised a very long easter egg hunt.
I'm planning to take a second look at this South Bend on Wednesday. I've offered $1k, seller countered with $1.5k and delivery (~3 miles). Superficially it seems well-worn but not broken, with a functional minimum set of tools: 3 & 4 jaw chucks, a few 6k collets, lantern post and tool holders, steady rest and tailstock chucks. No boring tools, no taper attachment. Spindle feels ok, QC box works. Scraping worn off bed at headstock. Long and cross feeds work, haven't checked threading yet.
If nothing else seems to be wrong (chucks all fit and work) splitting the difference seems like a reasonable settling point.
I'm near Sacramento, CA. If there's a heavy 10 or Monarch 10EE hiding in yonder shrubbery please point it out 8-)
Thanks for reading,
bob prohaska

Yeah, maybe! A guy near me bought a Jet lathe from a national distributor, against my advice. It would not even turn on! The linkage from the apron power handle was misassembled at the factory, so it would not trip the switch in the headstock. He had about 5 major problems with damaged or just plain wrong parts on the lathe. The distributor was real good about shipping him whatever he told them was wrong, and he eventually got it running, but it was a lot of work. The headstock was filled with oil, and also tons of metal chips, etc. so he had to flush all that out.
As for the South Bend, there are tons of these lathes out there, and a constant supply of them are being parted out, so you can get used, serviceable parts fairly easily. I had an Atlas lathe for years and there were used parts available for that, also, as well as many, but not all, new parts from Clausing. You should join the Yahoo group for the lathe if/when you get it.
Jon

I have to say that Jet has gotten a hell of a lot better in the past 5 yrs. I do a fair amount of work for a Jet dealer and the machines are getting pretty reliable now. No idea of the age of your friends machine...but it may have been a Monday machine, no matter who made it. Or it was before they started improving.

Just remember that with Clausing..and I have 2 of them..they want your first born as payment for parts. Cheap they are not.
Gunner
"

There was a good article about reworking a new Chinese gear head lathe, I thought on the Model Engineer site but can't find it at the moment.
Basically the usual casting sand in the headstock etc but the author was pleasantly surprised by the quality of many of the precision machined components but did say that the assembly of many of those components appeared to have been done by our hairier cousins in the evolutionary tree. The suggestion was the precision machining may have been subbed out and good quality but final assembly and fitting standards were poor.
Get the final stuff right and maybe the savings with shipping isn't so great as making locally. I have a Harrison M300 made in the UK and they have had them made in China in more recent years apparently and regretted it from what I have been told.


Couple of years ago a fellow had a nice little Clausing that was "sort of" for sale. It had a small broken part, I think something in the tail end of the leadscrew support. He claimed to have a quote request in to the factory, I asked him to let me know the parts cost.
Never heard from him.
Thanks for replying,
bob prohaska

That might work, but I had an old Craftsman 6" as a child and it was a very crude machine. An excellent teacher, but not one I'd want in a larger size. Also a two day trip.

I looked at that ad, but no QC and no power cross feed.

Very nice, but waay more than a grand....

I hope you're joking!

Much too big.
Not sure it was your intent, but you've about convinced me the machine I'm looking at is a decent find if nothing's too badly damaged.
Thanks very much for posting, you've provided very helpful perspective..
bob prohaska

You are really that slow? Call him and see if he will ship it.

Not in the slightest. The Shop Task was a machine that is far better than most of the chink machines and while its not a Swiss Deckel....it works.
Google it .
http://bbs.homeshopmachinist.net/threads/53844-ShopTask-1720XM
There is extensive writings about it and thousands of mods you can make. It wont thread though IRRC.

(Grin)
It should be noted...that I run a business repairing and selling machine tools. Lathes, milling machines, drill presses...and I have numerous machine tools in my home shop..and am responsible for literally millions of dollars worth of high tech machinery in shops across southern California. CNC, manual etc etc. Ive been doing it for almost 18 yrs now..and Ive learned a tiny little bit about machinery..a smidgen.
There are lots of machines out there that you can get good use out of. Most cant be touched for $1000. But...every now and then you will find the Deal of the Century!!...chuckle..and thats what you need to be looking for. And given that Sacto isnt a manufacturing town per se (other than leftwing bullshit) ...you are likely going to either have to drive somewhere to pick on up..or have it shipped to you.
Have you called the various school districts and inquired about their suplus departments? You are aware that in California...most school districts once had metalworking shop classes..using those very same machines you are in love with...and thousands are still..still in storage in school warehouses collecting dust. Same with junior colleges etc etc. Those metal shops having been shut down to provide space for less "risky" educational bullshit.
And have you put an ad on Craigslist "Lathe Wanted"? There are thousands of widows and old timers sitting on machinery they have no use for and as the long night approaches..would love to get to someone else who will continue to use it.
Jumping on the first Atlas (Yuck!!) you run across..may not..not be your best option unless you have no self control. If that is so..you have bigger problems than finding a lathe.
https://picasaweb.google.com/104042282269066802602
https://picasaweb.google.com/104042282269066802602/ShopDec282012
And you might want to reevaluate your useage of existing space...a smidgen....
Gunner Coyote Engineering OmniTurn CNC lathe Specialist Air compressors and air handling General manual machine repair and Hardinge specialist
"


Yes, I'm that slow, and I wanted to put a hand on what I'm buying.

I'm just looking for a hobby machine to use, not a trophy.
Paid $1400 for the South Bend 10k. The tooling is enough to get started, the owner delivered and set up. Machine looks and feels reasonably good apart from visible bed wear, maybe .002" near the headstock. For what I'm doing that won't be a problem. The biggest anomaly is a DC variable speed motor.
In sum, it isn't perfect but is likely to give good use.
Thanks to everybody for reading.
bob prohaska

Got any pictures yet?
Jon


Didn't realize there was interest. I'll try to put a few on my website. The lathe's no looker!
8-)
Thanks for reading
bob prohaska 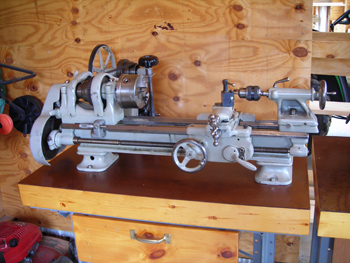 Ayup!
Others fix em so they can be used, to hell with the paint.
"


This one is in the "usable" class, barely. The spindle's ok (half mil TIR at the headstock with a 3/8" tap in the collet) but the saddle lock loosens close to 20 mils from tightest to the low point. Likely the tailstock is down by little less.
Apart from the motor pulley (brazed back together) nothing seems broken. The lead screw end bearing is surprisingly sloppy, the countershaft bushings are worn vertically but not laterally.
The DC motor will run down to a slow crawl, there is a jig for winding rectangular coils of wire and some sort of turns counter which looks like it can stop the motor at a preset turns count.
The machine's no jewel, but it's still a better lathe than none.
Question for the ancients: The oiling instructions say to flush the spindle reservoirs every six months. I don't see any drain plugs, can anybody tell me (or point to a link) how it's done?
Thanks for reading,
bob prohaska

Id remove that unless you intend on winding coils.

http://www.practicalmachinist.com/vb/south-bend-lathes/spindle-reservoir-flush-198489/
Pay particular attention to the warnings about the wires.
Gunner