First the set-up, then the questions... To see the photo I'm curious about, either go directly to < 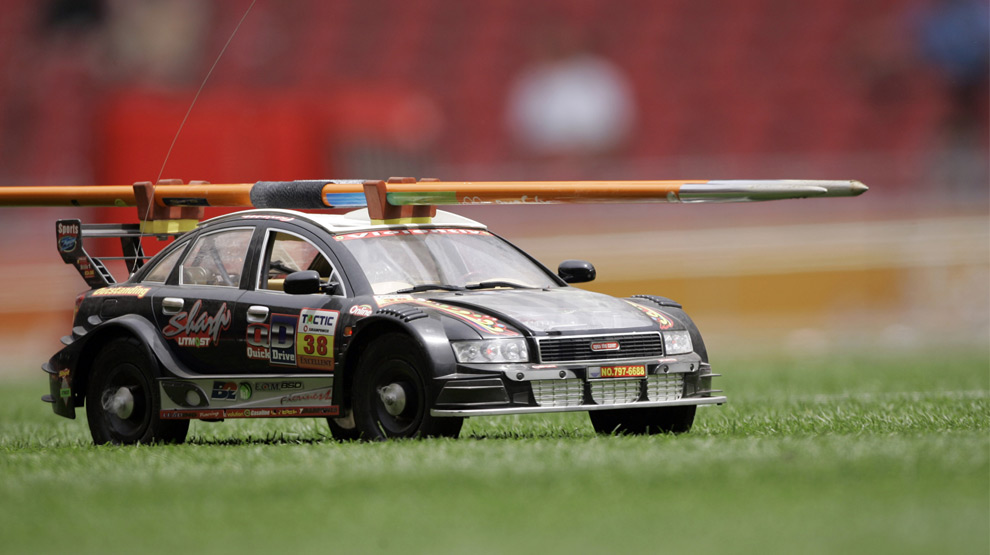 http://cache.boston.com/universal/site_graphics/blogs/bigpicture/oly_06_06/oly9.jpg or go to <http://www.boston.com/bigpicture/2008/06/olympic_preparations.html and scroll down to the ninth picture.
The caption reads:
"A remote control car transports javelins back to the athletes, keeping humans out of harm's way, during the first day of competition at the Good Luck Beijing 2008 China Athletics Open at the National Stadium, Thursday, May 22, 2008, in Beijing."
(Note: the eighth photo also shows some track-and-field javelins.)
My questions are:
(1) what if any real car is this a model of,
(2) can anyone make an educated guess at the scale, and
(3) given the approximate scale, is this likely to be an off-the-shelf RC (remote control) model with a javelin rack added, or something that had to be custom made because RC's don't come in that scale (i.e., it's clearly too big to be Standard Size #1 but too small to be Standard Size #2)?
-- wds

I'd expect off-the-shelf, since if you were building something custom it would have a greater carrying capacity and a lower c of g.
Tim

Since the javelin protrudes out of frame to the left, we can't really tell the relationship to the car.
I'm aware of 1:8 models, but i don't recall any 1:6 (which isn't to say they don't exist).
1:8 (also known as "1-1/2 inch") scale is a common scale for rideable live-steam railroad models. I once met Daniel Boon V (yes, he was a descendant of the famous one), a blacksmith in North Carolina, who had built an incredible 1:8 model of a Union Pacific Big Boy.

--
"Wikipedia ... it reminds me ... of dogs barking idiotically through
endless nights. It is so bad that a sort of grandeur creeps into it.