I recently bought a Miller Trailblazer Pro 350D with a Kubota diesel and 714 hours, along with other items that I bought together as a lot. 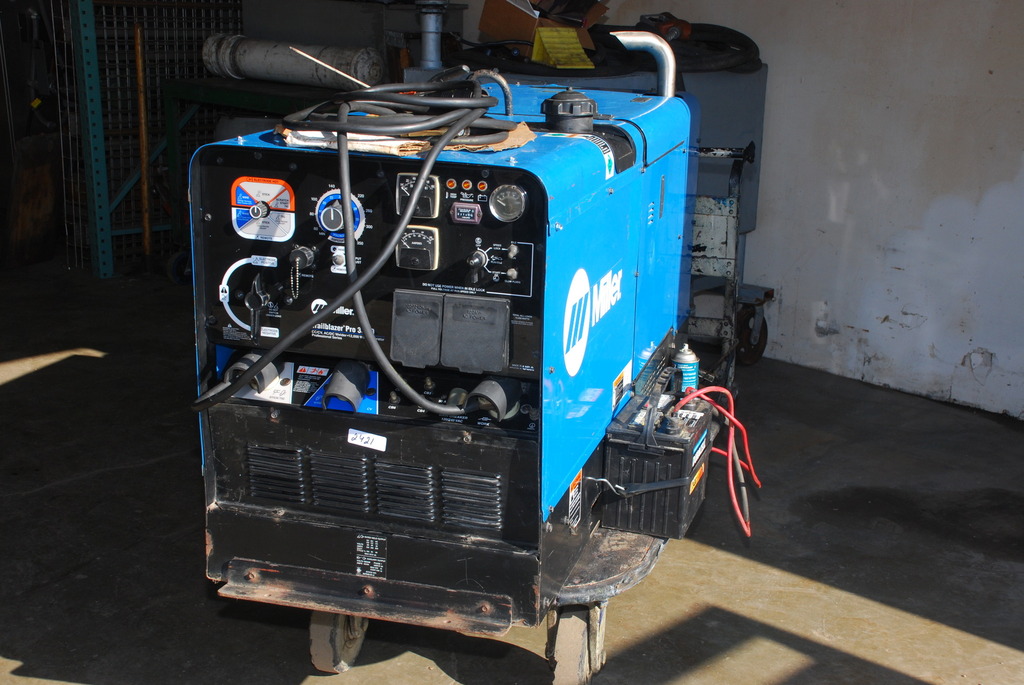 http://yabe.chudov.com/Miller-Trailblazer-Pro-350D-with-Kubota-Engine-740-hours-2421/2421-0001.jpg
After I brought it home, I noticed a tag on the welder saying "BROKE".
While a disappointment, I reasoned that
1) the seller, a demolition man, was not aware of this tag, as he would either remove it if he was dishonest, or tell me about it if he was honest. 2) The welder likely was not worked on, as the tag would have been more specific if someone looked at it more closely.
What was going on with it is that it would start and run great, but would produce no output, AC or welding current.
A bit of diagnostics with a multimeter, and staying on the miller forum and calling Miller, all pointed to a bad circuit board. I took a bit of risk and bought a replacement from Miller for $500 plus tax.
The result is great, the welder, now, runs great and welds pretty good.
Apparently, that board was poorly designed, and dies for spurious reasons, like when someone tries to jump start a dead battery.
i

thats one expensive board!


Many are much more expensive than that...
i

Just out of interest can you put up a photo of the faulty board. I'm interested in what's on the board and how repairable they might be.


Sure. I am going to sell the defective board, actually, with proper disclosures, of course.
i


Apparently they are repairable. IIRC there's a place in the south - NC? that specializes in Miller board repairs.
RWL

At $500 for a replacement, repairing them could be a good little sideline!

They are bastards when they do that. I've soaked boards in different solvents for a few days to break the sealant down. Sometimes it'll form a gel that you can brush off.


This board is sealed, and for a good reason.
i

Conformal coatings are good, but not perfect. The trick is finding the right solvent to melt the coating off the board for repairs - and not melt the board or the components. (Oopsie...)
Myself, unless the machine is getting used every day I'd save the bad board for now - unless the guy is offering a good price to repair it now and have a good spare on hand.
Otherwise, when it blows up again, send in both boards for repair. The shipping is probably half the cost.
The real trick would be for Miller to (GASP!) release the board schematics, parts lists (with conversions and substitutes) and repair instructions - Because you can get a new circuit board now, but how about in another 10 or 15 years...
Hate to say it, but when people drop that kind of cash on durable tools, they expect to keep them for a long while. Like my Miller Challenger 152 that better work till I'm ready for something bigger.
--<< Bruce >>--

I've researched patents on welders (from curiosity - I don't own a welder), and they sometimes have the full circuit diagram in the patent, even including component values.
If the welder has some patent numbers on it (or in the manual), it can be worthwhile to look the patents up.
Joe Gwinn

I agree, what the fuck, a welder dies from jump starting a dead battery? They can do better than that.


They spend money on parylene coating for a reason. It protects the board from water, corrosion, and also prevents sneak paths via conductive crap deposited on the traces.
But I'm sure *your* welders are kept in clean-room conditions, and such would never ever be exposed to such hazards...
{You want PITA: take the WWII fungusproofing seen on radios such as command sets, etc.}

Dave, I also cannot imagine welder boards without conformal coating. Additionally, I think that engine driven welders should have all boards enclosed in sealed enclosures with watertight connectors.
i


I am explictly thinking of the threat of vaporized/sprayed/whatever metals taking up residence on a board....Never any of those in the air near a welder, right?
But dampness is just as good a board killer.

Or military broadcast gear that was prepped for jungle use, no matter where the military radio station was located. The crap was so thick that you had to use a large soldering iron to burn it off the terminals, to repair the equipment. The Gates console at Ft. Greely was shipped that way. I don't think it was the original console, since the station went on the air with homebrew equipment.

You need some "conformal coating remover" I think GC used to make some - not sure if it is still available - pretty nasty stuff.

General Cement sold 'Print Coat Solvent' for their silicon based coating. I may still have part of a 40 year old bottle, in my shop.

Tell me where gunner.
The one source I found for an SP150, not mine, a buddy's; the sobs never returned my calls. BUT the board appears to have been tested out and the "usual screw-up" components were stripped of whatever coating Lincoln uses. (by a Linclon dealer) (yeah) The actual complete board "isn't available any more" /end quote.
An IC and one or two others (items) where cleaned and probably just need the parts sussed out on the interwebs. I, me, sort of offered to find someone to fix it. I can solder it's just I prefer plumbing. ;)
But now that I think of it, he said he wanted it FIXED, two years ago, so I could charge him what I want. -shrug-

Thanks Gunner. I'll have a 'nother look. The first outfit I had tried was wiped out in the storms through the Carolina's last year.
(evidently had no offsite mechanism for backing up their server or anything.)