is there a kit of the chopper that Mickey Rooney flew?
Craig

*******    Just for information the Belcher Bits product [BK-02] Sikorsky S51 contains decals for the HO3S-1 (BuAer 123129 / UP-3) as seen in the film 'The Bridges at Toko-ri'. In addition there is a pilot figure representing Mike Forney as played by Mickey Rooney complete with top hat and scarf.
Cheers - Jim.

Shame they were Banshees in the book. I did get to see a Panther in action at an air show about 20 years ago. After the modern stuff the noise wasn't anything but the sight was fabulous.
Bill Banaszak, MFE Sr.


it's easy to forget the polarization that existed then. i remember knuckleheads who would flip out if you expressed any doubt about the west and showed any appreciation of the east. don't forget the fall-out from the mcarthy era, too. both sides did a lot of chest thumping and showed a lot of intolerance. sometimes when i remember the 50's-early 60's, it seems like a different universe women friends express a lot of bitterness for that time also. which i can't blame them for..

And the Japanese were barely human at best. :-) Remember the scene in that movie where the put the captured B-25 crewmember on the stretcher with "Donated By The United States For Earthquake Relief" printed on it? Here, Mr. Moto seeks revenge on the U.S. for the Dolittle raid: 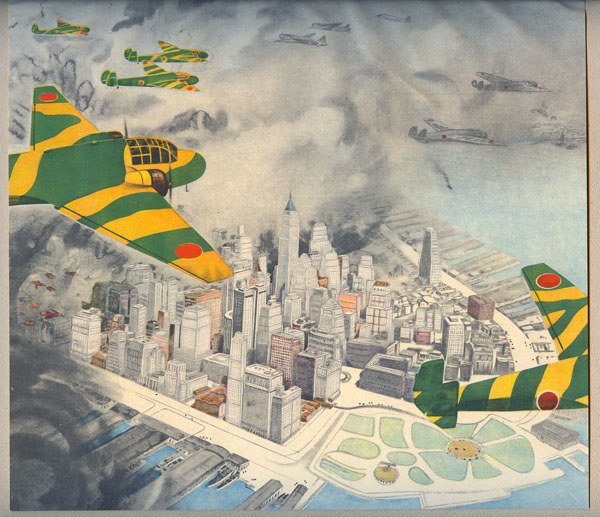 http://www.yellowairplane.com/Art_Aviation_Art/JapaneseWW2PropagandaArt/AviationArtWW2BombersOverNewYork.jpg
Okay, sneaking the Akagi around South America with the Nells aboard is going to be tricky, but who knows what the wily Jap has up his sleeve? Hey Bruiser, what do think of that Moto Guy?: