Doing a little searching online, I can't find any reference to a crane of this type on bogies. I presume it is actually based on an eight wheeled Booth design used on the Western Region, in all other respects it looks very similar. The eight wheeler design is described by several sources as a 0-8-0, does this mean that this design is self propelled? Lots of references which suggest other cranes are self propelled, but nothing regarding this design, Cheers, Bill.


I think there were pictures / some sort of feature in model rail a couple of years back, that is if I have the right crane?
I think the Gwili railway has a crane similar to the one featured?

Opinion only; there seems to be no real advantage in building a 4 axle crane on bogies as opposed to building one on a rigid frame, unless of course the builder already has bogies and their associated frame mountings on the shelf. OTOH the British builder probably already has the rigid frame add-ons designed and ready from Loco tender designs. The 4 axle rigid frame will most likely be more stable than the bogie design at low speeds whereas the bogie is better at higher running speeds as well as being smoother riding, something not really important for a crane.
Some cranes had the provision for moving themselves at slow speed, but don't think you can bring your crane out as a substitute loco when the 0-8-0 breaks down as it wouldn't have the power to move a long coal train.
From your research, it sounds like Airfix used bogies where a rigid frame should have been provided. Perhaps you could substitute an A4 tender underframe :-)
Regards, Greg.P.


That's not dissimilar to the original's arrangement, though I suspect a scratchbuild would be necessary to achieve a reasonable likeness. My thoughts were that if the crane should be self propelled, building a more accurate model in 0-8-0 configuration would benefit from having a small motor, to propel it and it's match truck independant of any other locomotive. On the other hand, no point in motorising something which shouldn't have it's own motive power, Cheers, Bill.

Bill If you can post a picture of the crane somewhere I can have a look in my book of WR crane diagrams for you, see if there's a match. 'Fraid I'm not familiar with the Airfix/Dapol crane. Simon.

The instructions provided by Airfix were careful not to say exactly what it was a model of, but the bogies were clearly designed for cranes so I would suspect they obtained manufacturers' drawings for a model they did not actually manage to sell, but it could have been sold for industrial use.
The prototype info given by Airfix is:
10/15 TONS DIESEL-HYDRAULIC LOCOMOTIVE CRANE The locomotive steam crane was firmly established before the introduction of the internal combustion engine in the late nineteenth century and due to its relative simplicity, long life and trouble-free operation it has persisted up to the present time. With the movement away from steam it has, however, become outmoded and often inconvenient to operate. The quantity produced Diesel engine has provided the natural answer to the question of alternative power plant but, as it lacks the flexibility and reversibility of the steam engine, steps have to be taken to compensate for these limitations in the design of the transmission system. These considerations have led to the evolution of the Diesel-hydraulic locomotive crane manufactured by Clyde Crane and Booth Limited of Rodley, Leeds. The cranes employ a hydraulic transmission system in which a hydraulic pump driven by the Diesel engine transmits power through a system of tubes and control valves to a hydraulic motor coupled to the primary shaft. Four speeds in either direction are obtained by selecting fluid circuits by means of hand lever operated control valves. These four speeds apply to the travelling, hoisting and derricking motions and the crane driver selects the motion required by manipulating further hand levers which control compressed air operated clutches on the primary gearbox. The slewing motion only is driven and controlled electrically. Compressed air for the controls is provided by a Westinghouse compressor set driven by the engine. This also provides pressure for the Westinghouse travelling brake cylinders. Due to the reversible hydraulic transmission system loads can be hoisted, or lowered under power, without the necessity of applying a mechanical brake but, a hoist brake is provided as a safety precaution and for use when circumstances render this desirable. The crane is simple to operate and requires the minimum of physical effort on the part of the driver. The main controls consist of eight identical compressed air control levers operating the speeds, motions and air brakes, a reversing lever with direct linkage to the hydraulic motor, a drum-type electrical slewing controller, hoist brake pedal and accelerator pedal. These cranes can be arranged for various types of duty but they are normally of 10 or 15 tons capacity and versions are supplied for main line railway operation and for general yard and sidings duties in steelworks, etc. Ten Booth Diesel-hydraulic cranes were supplied to the Western Region of British Railways in 1958-59.
TECHNICAL DATA (Typical 15 tons crane) Engine - - - -    McLaren Type M. Mark II. 3 cylinder oil engine. Maximum governed speed 1,100 r.p.m. Transmission - -    L.E.H. hydraulic-transmission unit with 4-speed power take-off. Hydraulic Fluid Capacity - 56 gallons. Fuel Oil Tank Capacity     - 25 gallons. Length over Buffers -     26 ft. 7 in. Length of Jib - -     35 ft. Hoisting Capacity, Free on Rails -     10 tons at 16 ft. radius. 3.5 tons at 30 ft. radius. Hoisting Capacity, Propped (Draw Girders out and Jacks in position) 15 tons at 16 ft. radius. 5.5 tons at 30 ft. radius.
Note it talks of typical cranes and does not say that the model is based on those supplied to the WR. Pictures you will find readily on ebay on the boxes of all the kits on sale. Keith

--
Jane
OO in the garden http://www.yddraiggoch.demon.co.uk/railway/railway.html

It didn't at Llanelli Steel..... I'd suggest using a 4 wheel bogie of the sort Branchlines sells, with a pony truck at either end. Regarding their hauling trains- they would normally be used within an engineer's possession or within a yard, perhaps moving one or two wagons with them. Brian

Absolutely! Build it with no side movement on 1st and 4th axles and a millimeter or so on 2nd and 3rd! Alternatively, if you chicken out, put flangeless wheels on 2nd and 3rd. The sideways displacement on a four axle rigid frame is less than that of a 3 axle rigid frame and there are plenty of examples of long rigid 3 axle wheelbases im British railways. eg. every Pacific loco.
Regards, Greg.P.

There are indeed plenty of examples of long wheelbase 6 wheel locos Greg but the Pacifics are not among them! Do some comparisons, usually you will find the traditional 0-6-0 locos are the longest, 2-6-0 and 4-6-0 not far behind at the Pacifics shorter, this is because Pacifics have to get all 6 wheels in front of the firebox and hence the wheels are usually as close together as can be managed, the other outside cylinder classes need to fit the firebox between the second and third axles thus opening out the wheelbase at the rear. The inside cylinder clasases, mainly the 0-6-0s also have to get the crank axle in front of the firebox and the front axle far enough forward to dodge the motion work so forcing the wheelbase to be still longer. And there would have been hunderds of these for every Pacific. Cheers Keith

No mystery.
It's nominally a Booth (of Rodley, Leeds) 10T / 15T (there were originally two versions) diesel self-propelled PW crane, supplied to the WR in 195?; (don't have the file to hand).
The supplied carriage and bogies may be correct for the industrail version, but the BR ones had an eight-wheel rigid underframe similar to that of many breakdown and PW cranes.
The model and prototype has been covered in the model press on several occasions; most fully in a not-too-ancient edition of Model Rail.
The kit jib is probably that of the industrial version; the BR version had a longer one.
The BR cranes had jib runners converted by Swindon from bogie bolster wagons; conveniently for us the short one produced by Airfix / Dapol / Hornby.
Eventually, I'll get round to producing appropriate transfers; I need them for my model which has a scratchbuilt brass carriage with working steel draw-beams and screw stabilising jacks.
I measured and photographed a derelict example at Reading; copies of manufacturers' drawings came from BR(WR).
Regards, John Isherwood, Cambridge Custom Transfers.

It didn't read that way in your original, you picked Pacifics specifically as an example of a long wheelbase 6 wheel chassis. As you were at pains to point out that sideplay problems are worse with 6 wheelers given that the centre axle is close to the centre of the chord. For 8 wheel chassis A4 tenders are 16'. A GWR 4700 class 2-80 had a coupled wheelbase of 20ft which is getting to be long

You're right of course, but the Pacific was just an illustration of how existing models can run around R1 to show that a rigid 4 axle crane should be no problem. Personally, I run 2-12-0 locos around R2 in my hidden staging yard =8^)
Regards, Greg.P.


--
Jane
OO in the garden http://www.yddraiggoch.demon.co.uk/railway/railway.html

True, that's why (model) tender axles and bearings tend to be the straight type rather than pinpoints. (see Peco R30 bearings (from memory, hope I got the ref right))

replying to Bill Davies, Chillidragon wrote: Whilst searching for references I came across a marketing booklet by Clyde Booth showing this crane as modelled by Airfix, An inset shows the "Four axle carriage version for use on mail line railways". So it would seem to be an industrial variant after all. Until a few hours ago I didn't even know it existed in this form. 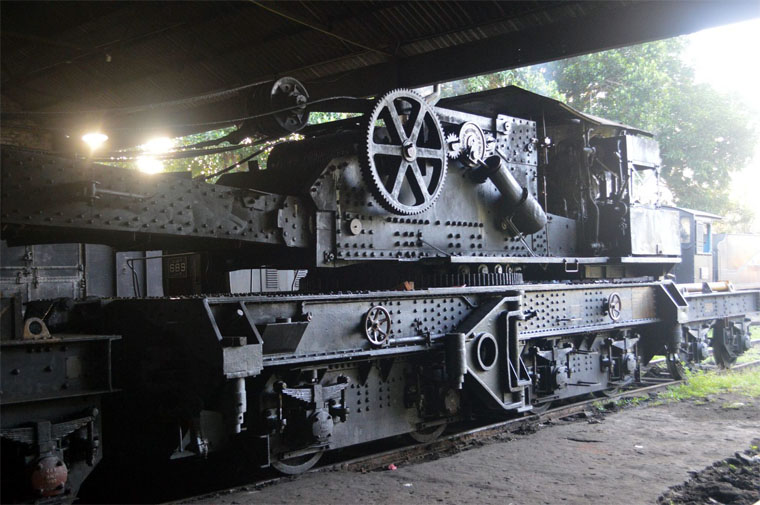